The final quarter of 2018 ended with a major correction for the S&P 500 index, declining 20% from its September highs. We’ve since rebounded off those December lows, with the index up over 8% in the past 8 trading days. Many say we’ve entered a bear market and an economic recession is looming. On the other hand, the bulls argue this was simply a correction within a secular bull market and the dip should be bought. The question on most investors mind remains; if and when will we see new highs in stocks? Here’s what one of the top technicians is saying.

Tony Dwyer is Chief Market Strategist at Canaccord Genuity. He was interviewed on CNBC today and asked about where he thinks the S&P is headed. To answer this, he went back over the past 40 years to find examples of when the market declined 20% from peak to trough within four months. He found that in 1987, 1998 and 2011 the S&P saw similar “crashes.” He argues the decline we’ve seen in recent months is similar to the decline we saw in 2011. He notes that the recovery from 2011 first saw a reflex rally of about 11% followed by a retest of the lows before moving on to make new, all-time highs. He thinks we’ll inevitably have to test the December 2018 lows. However, he emphasizes that as long as we stay in a non-recessionary environment, we can still recover from this retest of the lows and go on to make new, all-time highs in the index in 2019.

Looking forward, Dwyer explains that we’re currently seeing the reflex rally with the S&P up about 8-9% from the lows. Historically, the average reflex rally in the scenarios he has studied is about 13%. A rally of this magnitude would bring us to the 2600 level in the S&P. This is a key resistance level because it represents former support. Typically former support acts as resistance once it’s broken. At that 2600 point, you can expect an abundance of sellers that may halt and reverse any sort of reflex rally.  This would force the S&P to test its December lows. Dwyer thinks investors shouldn’t fear this retest but rather embrace it as a buying opportunity. If the market plays out like he expects it to, it might look something like the chart below. 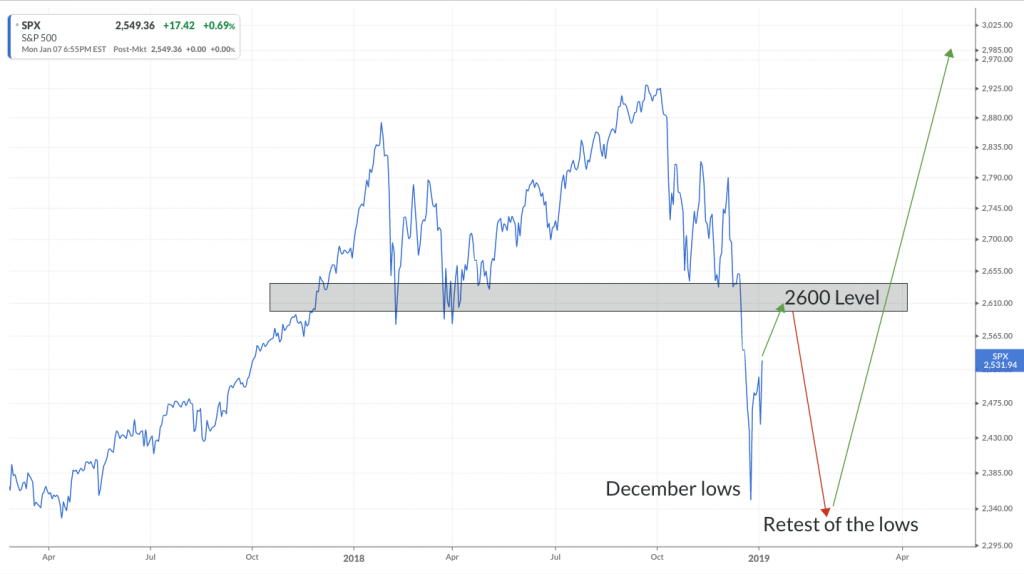 Mark Twain once said history doesn’t repeat itself but it often rhymes. In other words, we can’t expect things to play out exactly as they did in 2011,  but we can use that crash and recovery as a guide for what 2019 market movement might look like. If Dwyer is correct and we stay out of a recession, history would suggest we will go on to make new all-time highs. Either way, it’s going to be important to watch the 2600 level in the S&P. We should also watch for a retest of the December 2018 lows to wash out the weak hands. After these two things are complete a potential double bottom will have formed which could ultimately propel us to new highs. To watch the entire segment with Tony Dwyer on CNBC click here.