The S&P currently sits about 16.5% off its all-time closing high made back in October 2018. Stocks have already seen significant technical damage lately that has a lot of market participants wondering if the worst is over or are stocks in for more pain? In highly uncertain market environments like the one that we’re currently in, it can be helpful to use long-term charts to try and stay in front of any significant long-term trend changes. In addition, it can also be helpful to examine other asset classes for clues on where stocks are headed.

Carter Worth is Cheif Technical Strategist at Cornerstone Macro and a frequent guest on CNBC. He did a segment last night on CNBC in which he presented three long-term charts of three different markets that he thinks investors need to be concerned about and paying attention to right now. 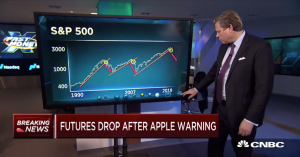 The first chart Carter shares is a multi-year bar chart of the S&P 500 index going back to 1990. The chart features three well defined long-term uptrend lines colored in orange and their subsequent declines in red. The yellow circles represent a 20% decline from their respective highs. He points out that the past two time’s we broke those trendlines we’ve experienced a 50% decline. He adds that while it may be “inconvenient” for some investors, the reality is we’ve just now broken that third trendline and if history is any guide we could be in for a major stock market decline. He remarks that this chart should be “food for thought” for market participants. 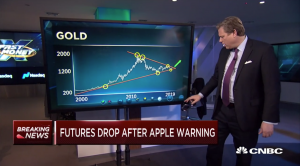 The second chart Carter shows is a long-term chart of gold going back to 2000. He begins by highlighting the obvious tightening or coiling pattern that has formed over the past few years. He explains that this tightening suggests that price has worked into a point where something “explosive” is about to happen. Carter expects the resolution of this is likely to be to the upside and is bullish on gold. Gold is typically negatively correlated with stocks which is another reason Carter suggests investors keep an eye on that pattern in gold. 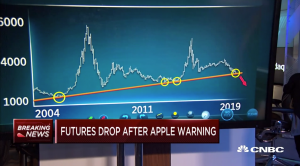 The final chart Carter presents in his segment is of China’s bellwether stock market index, the Shanghai Composite index. He calls it “the mess that is China” and notes that the index is currently hovering right at a well-defined trendline and that he expects the price to break the trendline toward the downside. The yellow circles represent all the times price has tested that trendline in the past few years. A significant decline in China’s stock market would likely have bearish implications for U.S. stocks as well.

In his segment, Carter Worth emphasizes that the three charts he shared are “thematic” meaning the three charts are all sending the same message to investors right now despite being three distinct and independent markets. Click here to watch the entire segment.