Currencies: The US Dollar Index gained 0.12%. 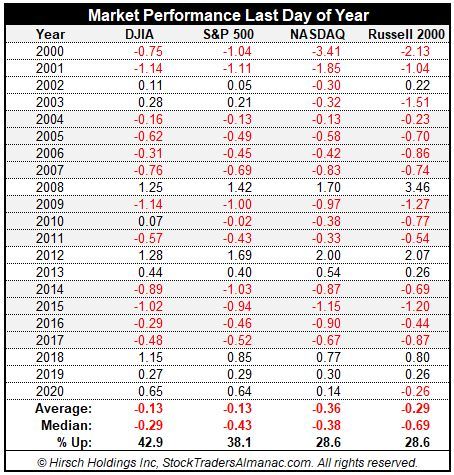 Today’s Chart of the Day was shared in a note by Jeff Hirsch (@AlmanacTrader). The table shows the performance of the four major indices on the last trading day of the year over the past two decades. Jeff points out that the last trading day of the year (tomorrow) has historically been the worst-performing day within the 7-day Santa Claus Rally. The Nasdaq and the Russell 2000 have performed the worst, closing higher less than a third of the time. The Dow and S&P have fared slightly better, but they’ve still closed lower the majority of the time. While average returns were negative across the board, they really weren’t that bad. One day in the grand scheme of things is pretty insignificant, so we shouldn’t read too far into this. But it will be interesting to see whether or not history repeats itself tomorrow. Click here to read the full note.

“I cannot teach anybody anything.
I can only make them think”

These Stocks are Built Different – All Star Charts
JC Parets highlights a couple of stocks that look poised to move higher – $CUBI and $MPC.

Three Groups to Watch Within the Material Sector – StockCharts.com
Julius de Kempenaer takes a look at the strongest groups within the materials sector.

Bulls Bounce Back – Bespoke
Bespoke breaks down the results of the latest AAII sentiment survey.

2021 IPO Boom & Bust – Arun Chopra
In case you missed it, here’s an epic thread from Arun Chopra on the dangers of buying high-profile IPOs when they first debut. 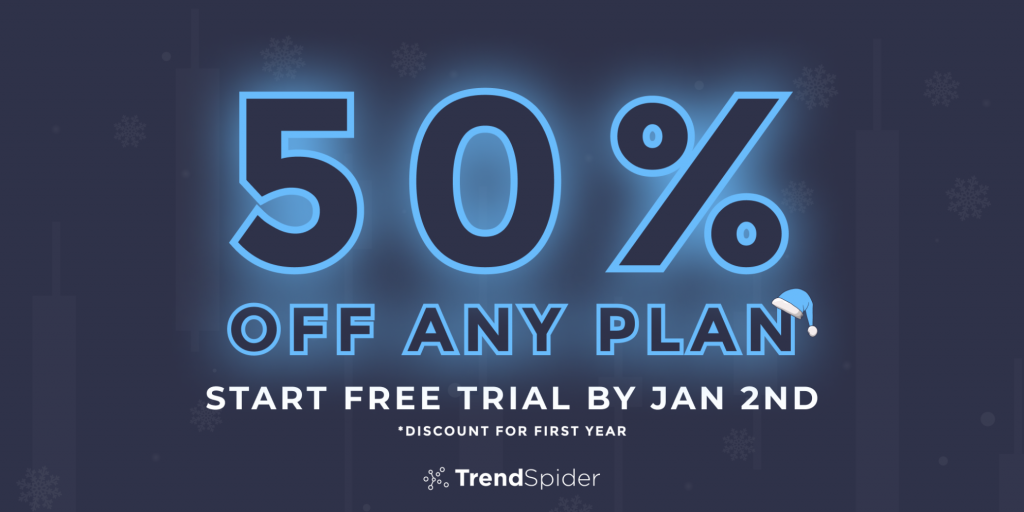 TrendSpider’s End of the Year Sale is Here!

Sign up for a risk-free 7 day trial of TrendSpider between now and January 2nd to enjoy 50% off any plan for up to 12 months if you decide to renew!

Here's what happened after previous 7 quarter S&P 500 win streaks (like we are about to have).

Higher 100% of time 2 quarters later probably would surprise most.

Another day of sideways action during a holiday week as new highs slightly outpace new lows. It’s a choppy market and that requires diligent entries and tight stops until a direction gets rolling. Net highs in the bottom panel. pic.twitter.com/4kuH2iu0Nt

$SPY $SPX
A few days of consolidation and sideways action is perfectly normal and healthy.
The market has broken out. It would be nice if the $QQQ could follow suit from its own sideways range. pic.twitter.com/Ij1X3etbUH

"only 5 stocks are driving this market" pic.twitter.com/jXFBTYTOcd

Over the last 10 years, cap weighting has generally been superior, but it wasn't as pronounced as I thought it might be in the S&P 500; in the Nas 100, however, it was a huge difference pic.twitter.com/sfaHeQLhog

$TNX still holding above key level… $XBD and $BKX / $SPY are below their key levels… do yields follow? pic.twitter.com/wQnN2qAZq6

Is Newmont trying to tell us something about Gold here?$NEM at its highest level since August pic.twitter.com/lGbWksN8f6

There is a big difference between these two relative trends.$MSFT $AMZN pic.twitter.com/IrlXijAr3t

who says there's no humor in finance pic.twitter.com/onXXy7CIuY