Currencies: The US Dollar Index slipped 0.16%. 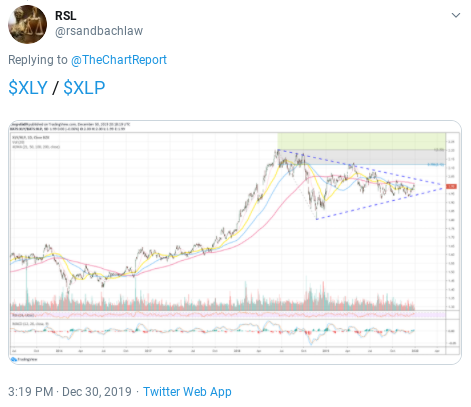 Earlier today, we asked our Twitter followers: What is the most important chart you’re watching heading into the new year? This chart from @rsandbachlaw was one that we thought was worth highlighting. It’s a ratio chart of the Consumer Discretionary ETF, $XLY, versus the Consumer Staples ETF, $XLP. This ratio serves as a useful risk-on/risk-off indicator for the broader stock market. Consumer Discretionary ($XLY) is the more aggressive of the two sectors and tends to outperform in risk-on environments. Conversely, the Consumer Staples sector, ($XLP) is less-risky and tends to outperform in risk-off situations. Even in a recession, consumers will continue to buy staples like toilet paper, soda, and cigarettes and avoid discretionary spending at places like Starbucks, Amazon, and Nike, all of which are components in $XLY. As you can see, the ratio has been somewhat trendless over the past year. However, it’s coiling up for a big move. If it breaks higher from this coil, it would indicate that Consumer Discretionary stocks are outperforming Staples, which would send a bullish message to the broader market. On the other hand, if it resolves lower, it would suggest a lack of risk appetitie in the market. Tell us what chart you’ll be watching in 2020.

“Never confuse a single defeat with a final defeat.”

Dow Testing Top Of 70-Year Channel, As Great Decade Raps Up -Kimble Charting Solutions
Chris Kimble shares a chart of the Dow Jones Industrial Average going back 95-years and highlights the fact that the index is currently testing the top of a long-term channel.

Twenty-Twenty – The Lund Loop
Brian Lund stresses the importance of remaining unbiased and objective in the new-year and reviews some of the most noteworthy charts of 2019.

Two Investment Tricks You Can Use for 2020 – The Reformed Broker
If you’re a long term investor, this is a must-read blog post from Josh Brown. He offers two simple investing tricks and touches on the importance of ignoring headlines in order to stay the course in the long-run.

New Traders: Where your focus needs to be NOW – All Star Charts
If you’re a trader, this is a must-read blog post from Sean McLaughlin of All Star Charts. He shares some valuable advice that will help new traders get in the right mental framework for success.

Interpreting the Put/Call Ratio & What Many Misunderstand – Andrew Thrasher
Andrew Thrasher addresses concerns over the low put/call ratio that many have been worried about recently.

The equally-weighted version of the S&P 500 still looks weak and is close to breaking through a major support zone. pic.twitter.com/CjfPzbwu0X

Probably the most interesting chart that I haven't seen anyone talking about. $XLF into All-time high test from the crash. pic.twitter.com/DDUVBSjepl

$XLF Financials still haven't broken out to ATHs. 4th attempt since '07. Trend remains up. A breakout would target a 50% move to 46+ pic.twitter.com/uRFVbGbBrW

The U.S. 2-10s yield curve has steepened to the widest since October 2018. pic.twitter.com/lQwFyfyqDw

Gold now testing price resistance from Oct highs around $143. A break above this level confirms the transition from distribution to accumulation. $GLD $GOLD pic.twitter.com/kQy4bhpTz8

The biggest move in the otherwise quiet FX market today is month-end selling in the dollar – my personal dollar index has broken definitively below its 18-month bullish trend line: pic.twitter.com/aOCAXkTXD5

How great is this? Happy New Year everyone https://t.co/1d4ZbqGecm pic.twitter.com/jiViTCiXBG