Keeping a close eye on TLT as bonds run into potential resistance just as a favorable seasonal window winds down. FWIW, almost everyone I follow is in the “Fed will pivot, rates will decline” camp, or so it seems.#sentimentrader pic.twitter.com/iHMdWeGvd6

Today’s Chart of the Day was shared by Jay Kaeppel (@jaykaeppel). It’s a daily candlestick chart of the 20+ Year Treasury Bond ETF, $TLT, year-to-date. $TLT is on track for its worst year since inception, down more than -26% YTD and -36% from its 2020 peak. However, it’s bounced more than +18% off its lows in less than two months, marking the largest rally since its peak. Jay points out that it’s testing its 150-day exponential moving average, while its seasonal trend flips from bullish to bearish. Sentiment also seems optimistic, with the Reddit crowd recently turning to Bonds for excitement. Will the recent momentum persist, or will Bonds find resistance?

“A trade to me is like a party, I want to arrive fashionably late, and I want to leave before the cops come.”

Where Are the New Highs? – All Star Charts
JC Parets takes a look at new highs within the S&P 500.

true support only known after fact, just a level of interest to diff participants pic.twitter.com/T0T4Cz4iUx

Zombie cos: can I haz gains tho?

Zombie cos: how about now?

Crude oil breaking down to its lowest levels of the year pic.twitter.com/lEwObX67n8

Oil making new lows.
Where to next?
The mid to low $60's are looking likely.
How price gets there is another thing. #OOT #Oil $USO $CL pic.twitter.com/X6qVHvkpfk

Gasoline is now down 3% on the year after being up over 90% at its peak in June. Stunning reversal that resembles the 2nd half of 2008 when commodity prices plummeted as the global recession deepened. 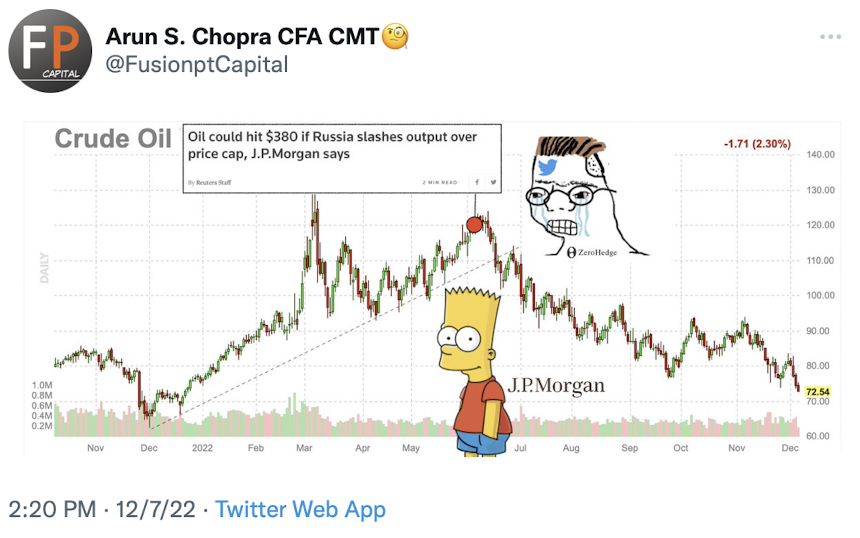