Commodities: Crude Oil futures rebounded 2.64% to $69.95 per barrel. Gold futures were flat and continue to trade around $1,786 per ounce.

Currencies: The US Dollar Index gained 0.14%.

Takeaway: the market tends to rise over time and tends to rise more following volatility spikes (note: on average, there are always exceptions and this latest spike could very well be one). pic.twitter.com/NsfshBynfW

Today’s Chart of the Day was shared by Charlie Bilello (@charliebilello). While most of us were in a food coma during Friday’s half-session, the Volatility Index shot up 54%. Charlie points out that this was the fourth largest 1-day % gain for the VIX ever. The table on the right shows the S&P 500’s forward total returns following some of the largest VIX spikes in history. On average, the S&P 500 has been positive across the board whether we’re talking 1-week later or 1-year later. Will this time be different?

5 Charts to Watch This Week – PFT Trading
Greg Rieben highlights five charts to keep an eye on this week.

Texas Tea Double Digit Dip – Bespoke
Bespoke takes a look at what has historically happened when Crude Oil drops 10% or more in a single day like it did on Friday. 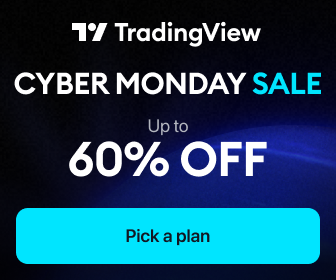 Today is the last day of TradingView’s Cyber Monday Sale

This is your chance to get their amazing upgraded plans – with best-in-class trading alerts, indicators, and much more – with discounts of up to 60% percent off! This year the deal is even sweeter than usual, with the discount extending for 13 months instead of the usual 12.

Don't give up on Santa just yet.

When the S&P 500 is up >20% for the year going into December, the final month of the year is actually stronger than normal.

In fact, higher 8 of the past 9 times. pic.twitter.com/7zKMTkbtFd

Not an ideal development for small caps last week, but not a complete breakdown of weekly trend either. Next few weeks are important. $RUT pic.twitter.com/Mf9hwuEuw7

Re: $IWM, the trailing 4 week pattern is an all-time high weekly close followed by a 3 week losing streak.

She's mostly hated right now, and the chart is a mess, so I like her here and now. pic.twitter.com/rXnTDhW8Zc

A version of a chart from last night's Thrasher Analytics letter…$VIX has typically had a tough time sustaining an advance after rising 10 points in a single day. 2008 and the Covid Crash were two exceptions. pic.twitter.com/MqLuYZnuul

The $VIX range has redefined itself with its upper boundary near 29; a decisive breakout (2x weeks above) would dictate $SPX caution from a sentiment perspective #fairleadstrategies pic.twitter.com/rqNirpPDZx

Today's action not going to do much to relieve concerns about weakness beneath the surface.

This was day 4 of both NYSE and NASDAQ having more new lows than new highs.

We are at 8 days in a row of NYSE+NASDAQ combined new lows > new highs pic.twitter.com/ZgciDjOyRV

After Friday, the average S&P stock is down 13% from its 52-wk high, which is right on the median. It felt painful, but given where we were beforehand it really wasn't that bad. (h/t @StrategasRP ) pic.twitter.com/WUWStYgugx

The weekly of the 10-Year Note gets my attention:
1. Sitting on support.
2. Testing 10-Week MA resistance below the 40-week.
3. Bullish RSI divergence.
4. Clear resistance for rates at the 1.75% level.

What's it going to be? pic.twitter.com/qvwsT3IE93