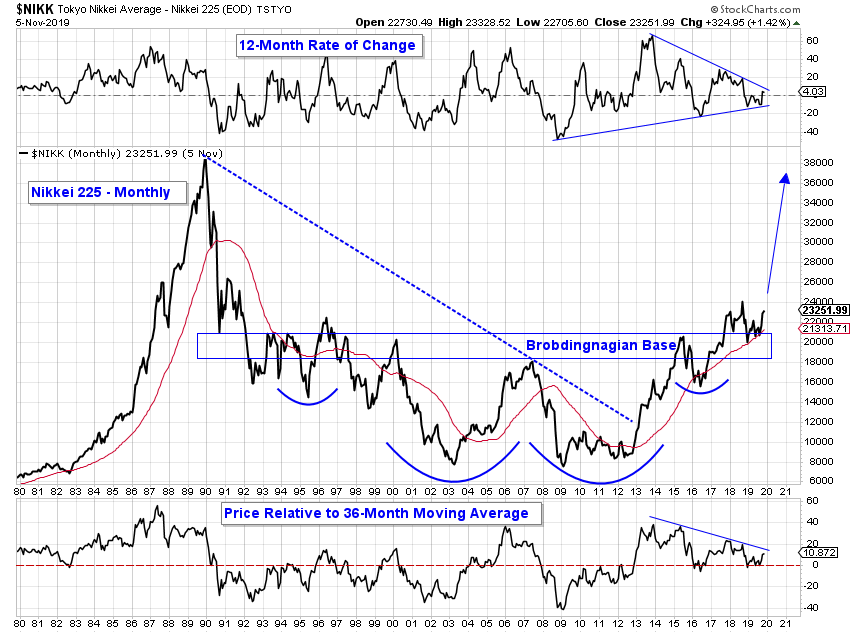 Today’s Chart of the Day was shared in a research note by Jeffrey Huge. It’s a line chart of Japan’s Nikkei 225 index going all the way back to 1980. The index is up over 20% YTD and today it closed at a new 52-week high. It’s amazing that the Nikkei still hasn’t recovered from the massive bubble that formed 30-years ago. However, Jeffery thinks the index could test the former highs in the next 1-2 years. He explains: “we believe that the structural upside breakout in the Nikkei 225 positions the index to challenge its 1990 all-time high at some point over the next 12-24 months.” Part of his bullish outlook is based on the fact that price is breaking out from a multi-decade base. The index will have gain about 67% from here, in order to reach a new all-time high.

“The hard work of the future will be pushing buttons.”

High Low Friday – 11/8/19 – Dana Lyons
Dana Lyons highlights some notable stocks and ETFs that are trading at their 52-week highs/lows.

Tom Dorsey on Why We’re at the Start of a 20-Year Bull Market – Investors Business Daily
In this podcast, trading legend and chartist, Tom Dorsey of Nasdaq Dorsey Wright explains why he thinks we’re at the start of the next bull market.

Strategas’ Chris Verrone Breaks Down Stocks He’s Watching in the XLF – CNBC
Chris Verrone of Strategas Research Partners made an appearance on CNBC’s Fast Money to discusses the steepening of the yield curve and the Financial sector.

The True Message of the Market (and Thinking for Yourself) – Macro Charts
In this piece, Macro Charts provides an in-depth analysis of global equities.

This week marks the 29th time $SPX recorded a 5 week winning streak that closed at an ATH.

The index has then closed higher 2 weeks later 18 of the last 22 times. pic.twitter.com/z8B40CbcGb

The US Dollar has pulled back a bit recently and this is a similar pattern to what occurred in December '18 & June '19. But what if that pattern in the US Dollar doesn't play out as expected?

Here, I answer this and explore new markets to explore. https://t.co/xuOu6piyU5 pic.twitter.com/ZcgvWHqlCz

You could easily see another 50 bps higher in the 10 yr without anything to freak out about–which doesn't mean we won't freak out. Just means we shouldn't. pic.twitter.com/0tESFgZ4KW

If you're a bond bull, you really want to see this $TLT trend line hold. The weekly MACD tells you probably not to hold your breath, though. pic.twitter.com/trNDbFp0bR

After testing the VWAP from the ATH, Bitcoin is testing the prior resistance found at VWAP from the breakout in April. This will be an important level to hold if $BTC.X $BTCUSD is going to run into the end of year pic.twitter.com/mf53AkxlZ2