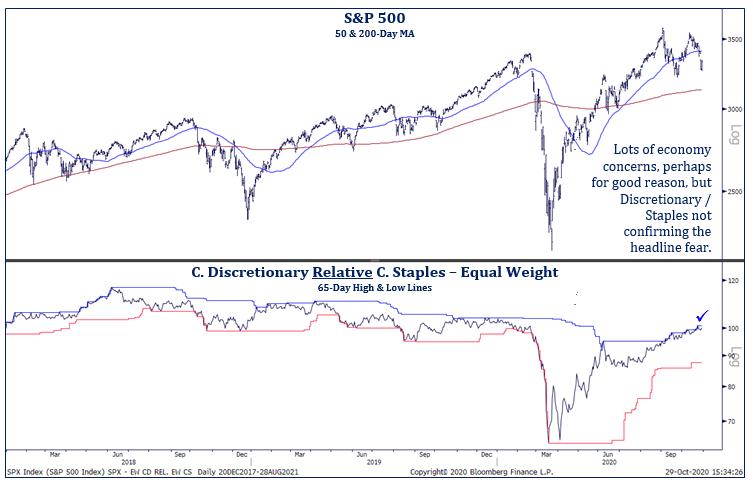 Today’s Chart of the Day was shared on Twitter by Chris Verrone of Strategas Research Partners (@verrone_chris). We all know there’s plenty of fear and uncertainty in the air right now. Take your to pick – The Election, virus-related lockdowns, stimulus, etc. Despite all these concerns and recent weakness in the broader market, Chris points out that several economic barometers are telling a more optimistic story. He explains, “Discretionary vs. Staples not confirming the ‘recovery is faltering’ headlines just yet…even this week, has held up remarkably well (along with rates, curve, copper/gold, etc.).”

“Progress happens too slowly to notice, setbacks happen too fast to ignore.”

Is the Nasdaq About to Fall 25 Percent? – Kimble Charting Solutions
Chris Kimble points out that the Nasdaq Composite is forming a large bearish reversal pattern at a key Fibonacci level.

Calling a Top in Tech – Marea Market Musings
Dan Russo disputes claims that Tech stocks are in a bubble.

Options Traders are Pricing in Fear, While Others Bet Against It – SentimenTrader
Jason Goepfert takes a look at the VIX Put/Call Ratio.

Here, a chart showing the percentage of stocks above their 50-day moving average. Not as oversold as March, but as oversold as the September low. #SPX pic.twitter.com/sBZgHVJs1G

For the third time in two weeks, 450 or more stocks in the S&P 500 declined. That's three 90% down days. As negative as it seems, it creates an oversold condition with the index just above the Sept low. $SPX $SPY pic.twitter.com/mVNILqmt9B

Short-term breadth washed out yet? Pct of stocks in the $SPX above their 20 dma < 12%…when this metric is under 15% and the index is under its 20 dma, $SPX is higher, one month later 75% of the time, median return of 3.52%@Optuma pic.twitter.com/WymhUqa5bp

Going thru charts, and these 6 stood out to me.

Ouch! The price of crude #oil has dropped to a 4-month low. pic.twitter.com/xsdzGhpQyD

Worst of the macro charts. pic.twitter.com/Svbhuz6uVc

Credit spreads have remained firm during the sell off in stocks which is indicative of a lack of excessive stress.

If we were heading into another Q1-like/significant correction, we'd likely see that stress in credit before all else, which we're not currently getting pic.twitter.com/Lt8U3yJ6Ge