Indices: US stocks closed higher in today’s session with the Dow Jones Industrial Average inching up 24 points or 0.09%. The Russell 2000 outperformed the rest of the major indices, advancing 1.10%.

Currencies: The US Dollar Index dropped 0.42%.

Interest Rates: The US 10-year Treasury yield moved higher to 1.75%. 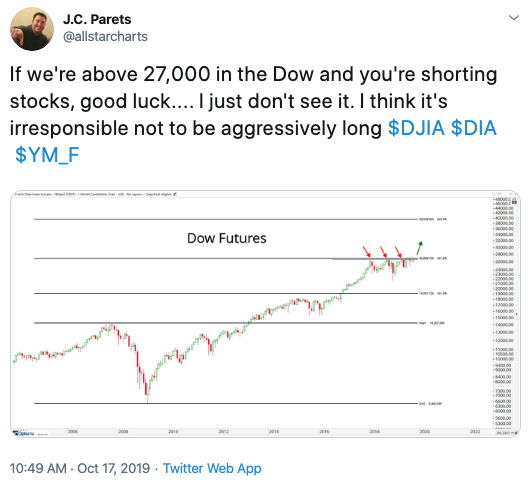 Today’s Chart of the Day was shared on Twitter by JC Parets (@allstarcharts). It’s a monthly candlestick chart of Dow Futures going back to 2004. The chart shows the key Fibonacci extension levels (161.8%, 261.8%, and 423.6%) measured from the 2008 decline. The chart serves as a great example of the way price tends to behave around important Fibonacci levels. The Dow broke above the 2007 high in 2013. It then spent the next two years rallying until it ran into the 161.8% Fibonacci extension. At which point, the Dow spent a year and a half (2015-late 2016) consolidating before breaking out after the 2016 election. From there, the index steadily rallied to the next Fibonacci level, 261.8%. Price is finally breaking above this level after having spent over a year and a half consolidating below it. JC explains that the risk is to the upside as long as we’re above that 261.8% Fibonacci extension, around $27,000.

“Our brains are wired for over-reaction and momentum.”
– Bruce Berkowitz (Hedge Fund Manager)

Positive Sentiment Surge – Bespoke
Bespoke takes a look at the results of the latest AAII Sentiment Survey. They explain that bullish sentiment has rebounded from depressed levels.

MA Breadth retaking the 50% threshold one at a time. none pulling away from it yet though. pic.twitter.com/NXfiWlRaCt

The most bearish active investment manager is twice as bearish as the most bullish one is bullish, per the latest NAAIM survey.

The last time that happened was 5 years ago. pic.twitter.com/wLVkjotiuh

– every Bull starts “nowhere”. Imagine dismissing 2009 as “dead cat bounce” and saying this until 2014. pic.twitter.com/ztiNLIUd2e

A lot of eyes on this one as a bearish warning sign. Not out of the woods yet but $EUFN retakes the 200 dma and the RSI could be shifting to bullish ranges. Worth keeping an eye on! pic.twitter.com/deIlMCOlRz

And I don't own a pair of $CROX either. It might make all-time highs again. WILD STUFF! pic.twitter.com/kvX481v8kM

$TWTR Just hanging out here. Earnings in a week. Maybe a little run coming into the report? We'll see. No real upward momentum yet pic.twitter.com/WX2MnGLyq8

When they say that sometimes gaps act as magnets I think this chart showing Netflix today after earnings is a nice visual pic.twitter.com/Id53GAT6uS