Indices: US stocks closed higher in today’s session with the Dow Jones Industrial Average gaining 151 points or 0.57%. The S&P 500 was the strongest of the major averages, advancing 0.64%.

Currencies: The US Dollar Index dropped 0.43%. 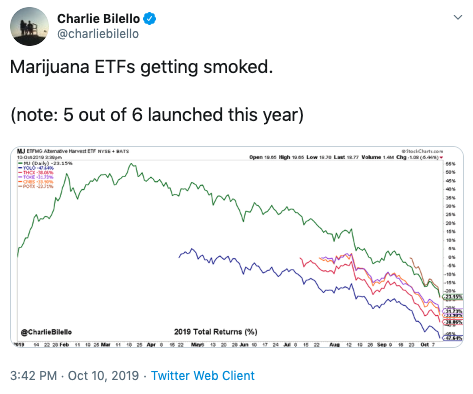 Today’s Chart of the Day was shared on Twitter by Charlie Bilello (@charliebilello). It’s a chart showing the year-to-date performance (total-return) of the largest Marijuana ETFs including; $MJ, $YOLO, $THCX, $TOKE, $CNBS, and $POTX. Charlie points out that almost all of these ETFs, except for $MJ, were launched in 2019. As you can see, all six ETFs have been crushed this year. The worst of the group, $YOLO, is down over 47%. The best of the group, $MJ, is still down 23%. Just a year ago, the Marijuana industry was being touted as the next Gold Rush or the Internet in 1999. Those who bought into “pot stock mania” are now left holding the bag. For more on the fallout in Marijuana stocks, check out our report, “Marijuana Massacre.”

“The object of life is not to be on the side of the majority, but to escape finding oneself in the ranks of the insane.”
– Marcus Aurelius (Roman Emperor)

Evidence on Both Sides – The Chart Report
In this report, we weigh the bull case and the bear case for US Equities.

S&P 500 May be Poised to Hit 3,200, Chaikin’s Russo Says – Bloomberg
Dan Russo of Chaikin Analytics made an appearance on Bloomberg yesterday to share his outlook on the S&P 500.

Remember to Buy in November – All Star Charts
We’ve all familiar with the phrase: “Sell in May and Go Away!” However, In this piece, JC Parets reminds readers to “Buy in November” as one of the best seasonal periods for the stock market approaches.

Since mid-September the S&P 500 has experienced lower highs with each rally attempt. This pattern needs to break to get confidence in a continuation of the longer-term up trend. $SPX $SPY pic.twitter.com/TRywJ2J9cm

Not unusual for the market to undercut/revisit the August low in a pre-election year via @AlmanacTrader.

Nearly unprecedented, *relentless* pessimism — lower than THE bottoms in 2002/09.

One of the lowest ever with Stocks near highs — last times were near the breakouts in 2012/16.$ES_F $SPX $SPY #Stocks pic.twitter.com/kCIyzoRROr

While small-caps are stuck below their 200 & 50-day moving averages, momentum has held up impressively.

If the $SPX is going to head northward in a meaningful fashion, this chart needs to improve, and so far… this is positive evidence of just that.$IWM $VB $SCHA $IJR pic.twitter.com/nupPseL5GL

You thought US small caps were doing poorly?

Well, Chinese stocks are much worse.

China, the engine of global growth, is stumbling. pic.twitter.com/ifDigbrwml

$TLT loses the 50d and possibly closes below the 21d pic.twitter.com/neJhFnJu5U

The dollar $DXY looks set to break down. Since August, its been coiling into a textbook rising wedge, and the latest high set a bearish divergence. We're testing support and if it goes DXY could drop to the August lows. If so, it could give $GOLD the catalyst for its next rally pic.twitter.com/LUkKXd11gk