Interest Rates: The US 10-year Treasury yield moved lower to 1.72%. 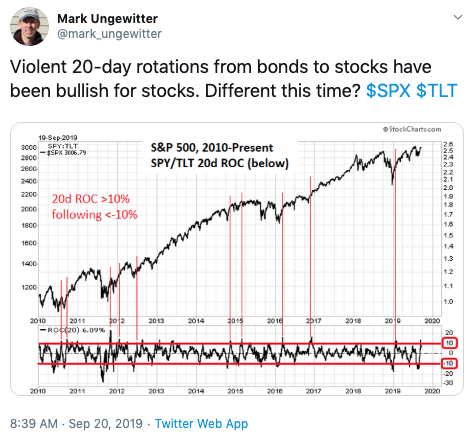 Today’s Chart of the Day was shared on Twitter by Mark Ungewitter (@mark_ungewitter). It’s a chart of the S&P 500 going back to 2010. On the bottom pane of the chart is a 20-day rate of change indicator for $SPY/$TLT. The vertical red lines on the chart mark all the instances where the S&P 500 rallied 10% or more, relative to Treasury Bonds. Mark notes that sharp rotations out of Bonds and into Stocks, like the one we’ve seen in the past couple of weeks, have typically been bullish for the S&P 500. Mark poses the question will it be different this time? As Sir John Templeton once said; “The four most dangerous words in investing are, it’s different this time.”

“Bitcoin is like anything else: it’s worth what people are willing to pay for it.”
– Stanley Druckenmiller (Hedge Fund Manager )

Digging Into the Divergence of Gold and Silver Prices – Bloomberg
Joe Perry of ForexAnalytix and Abigail Doolittle discuss the technical outlook for Precious Metals on Bloomberg’s Charting Futures segment.

Why This Investing Pro Says to Sell Into Roku’s Move – CNBC
Craig Johnson of Piper Jaffray breaks down the chart of Roku ($ROKU). He cautions viewers that the risk is to the downside on this stock.

High Low Friday – 9/20/2019 – Dana Lyons
Heres a simple but awesome piece from Dana Lyons that takes a look at some important stocks and indices that are at new highs/lows.

Nvidia Breaking Out – Here are the Levels to Trade – Yahoo Finance
Brian Shannon of AlphaTrends.net made an appearance on Yahoo Finance today to lay out some levels of interest on Nvidia ($NVDA).

If you had the S&P 500 this week would see daily changes of 31, 26, 3, and 0 basis points after the attacks on the Saudi oil fields I don't think anyone would have believed you back on Sunday night.

But that's exactly what has happened so far. pic.twitter.com/nZUEoYRqqI

The major indexes look like they want to go higher. Short term, we could see some weakness as the end of the quarter tends to see profit taking, but longer-term they look strong. As always, it's important to know your time frame. pic.twitter.com/xzTdyiW7IH

We don't read a lot into seasonality but market sentiment is conveniently creeping higher going into a rough part on the calendar using the @NDR_Research cycle composite. pic.twitter.com/gsC2qAj2lv

Here's Europe flat for a couple decades. This one never broke out in 2013 like the S&P500 did. What if it does? What then? $SXXP pic.twitter.com/ZQuEx8MqXK

$ROKU first zone is a bust……no triggers……beyond the next area, I don't have any setup… pic.twitter.com/V774VGYZDf

In early May, Netflix was up 43% on the year. After a 30% decline, it has given back nearly all of those gains, lowest level since Jan 3. $NFLX pic.twitter.com/8GzyVmob87

It's national Pepperoni Pizza Day today. This raises the obvious question "If I had put $10K into pizza stocks 5 years ago, would I now be able to buy a @Tesla now?" Not quite. @ycharts @yumbrands @dominos @PapaJohns pic.twitter.com/pqVh5BoHQ5