Indices: US stocks were mixed in today’s session with the Dow Jones Industrial Average slipping 52 points or 0.19%. The S&P 500 was unchanged and the Nasdaq inched up 0.07%. The Russell 2000 was the weakest of the major indices, falling 0.44%. 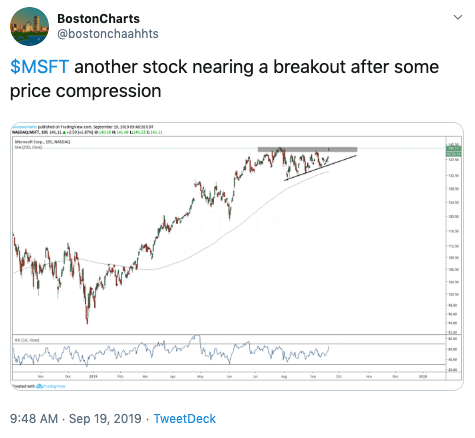 Today’s Chart of the Day was shared on Twitter by BostonCharts (@bostonchaahhts). It is a 195 min. candlestick chart of Microsoft ($MSFT). A lot of traders have been talking about this particular chart setup lately. There’s a lot to like about it. First off, the stock is in a healthy uptrend. Today, it hit an all-time intraday high. However, it has yet to hit an all-time closing high. BostonCharts points out that the stock is breaking out after some price compression. He’s referring to the ascending triangle pattern that price has coiled into since August. You have horizontal resistance around $141 and a series of higher lows. Keep in mind, Microsoft is the largest component in both $SPY and $XLK. If it can break out here, it would be a big positive for the broader market.

The Irrational Permabear – Money Game Podcast
In this podcast, JC Parets and Phil Pearlman discuss some of the psychological biases that many permabears exhibit.

Technician Breaks Down What’s Next for the Markets – CNBC
Todd Gordon of TradingAnalysis.com made an appearance on CNBC today to share his thoughts Microsoft ($MSFT) and JP Morgan ($JPM). He also touches on the Advance-Decline line.

Breadth Improving, but Not Yet Ready for an Upgrade – Baird
Willie Delwiche points out some of the positive technical developments, including the improvement in breadth in both the US and Europe.

Bears Back Off – Bespoke
In this note, Bespoke breaks down the results of the latest AAII Sentiment Survey.

$ES_F 1h chart. Gandalf is back. Fight is on. pic.twitter.com/QWYcr4a2jL

$IWM is deathly allergic to 159 pic.twitter.com/2ZP4x7HdNb

$RUT has successfully held a secular moving average and long term trendline for most of 2019. pic.twitter.com/yYQNBnrybU

Utes and REITs have been working for nearly two years. pic.twitter.com/11J2I8DVkt

After trading on either side of 90 the last nine months, $XLV is catching a bid today and breaking out of a small consolidation, and above the August highs. pic.twitter.com/6MZ7pDXrsr

If you take a larger step back technically speaking $JPM is in year 6 of a 14 year base breakout.$XLF $C pic.twitter.com/ugShOBWGve