Interest Rates: The US 10-year Treasury yield inched higher to 0.697%. 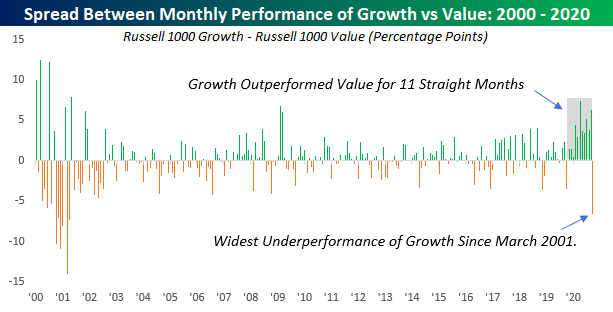 Today’s Chart of the Day comes from Bespoke’s morning note. The chart shows the monthly % change in the spread between large-cap Growth and Value. Bespoke points out that Value is having its best month relative to Growth in nearly two decades. This comes after 11 consecutive months of Growth outperforming Value. This is clear evidence of rotation, which is constructive for the broader market in the long-run. Although this rotation probably feels anything but constructive if you’ve been overweight Growth like a lot of folks out there. For more evidence of this, take a look at the S&P 500’s new 52-week high list. A few weeks ago, that list was dominated by the sexy mega-cap Growth/Tech names. Today, we’re seeing boring old Value/Industrial names like John Deere and Dollar General hitting new 52-week highs. The question that remains – is this a sustainable change in leadership? Or, simply Value’s 15-minutes of fame?

“The greatest discovery of all time is that a person can change his future by merely changing his attitude.”

S&P 500 Down 24 of 30 During Week After September Options Expiration, Average Loss 0.95% – Almanac Traders
Seasonality expert, Jeff Hirsch points out that the next week has a bearish track record.

IPOs: Boom or Bust – Ally Invest
2020 is on track to be the biggest year for IPOs in decades. In this note, Lindsey Bell breaks down everything you need to know about this surge in IPO activity.

Rocks Over Stocks – All Star Charts
Steve Strazza takes a look at Commodities and the Materials sector.

Petition to Release Real-Time Short Interest Data to the Market – Change.org
Short interest data is a great tool used to identify potential short squeeze opportunities. The problem is, FINRA only releases this data twice per month! Our partners at TrendSpider are petitioning FINRA to release this data in real-time. Please consider signing this petition, thanks!

Bears attempted to push $ES below the 3300 support level again… but dip buyers decided that it ain't gonna work.

'Make it or break it' show continues. pic.twitter.com/Z3vTheIWeM

Key level i am watching for the S&P 500 Advance-Decline line $SPY $SPX pic.twitter.com/idzY2ufuSi

$XME Metals and Mining …Would this be bullish or bearish for Materials? $XLB pic.twitter.com/tlHU8QqzLN

Deere, Freeport, and Caterpillar obviously didn't get the memo about Tech

Even if Tech drags the S&P 500 below $3,400, what's to say that these three and the Commodity/Materials trade more broadly will stop working, considering Mats only make up 2.7% of the $SPX?$DE $FCX $CAT pic.twitter.com/G0j978Q2bG

Wheat has been slammed every time it approaches $6 per bushel in the previous 6 years.

This base is huge.

A (perceived) "good company" does not always equal a good ROI.