Interest Rates: The US 10-year Treasury yield moved lower to 1.80%. 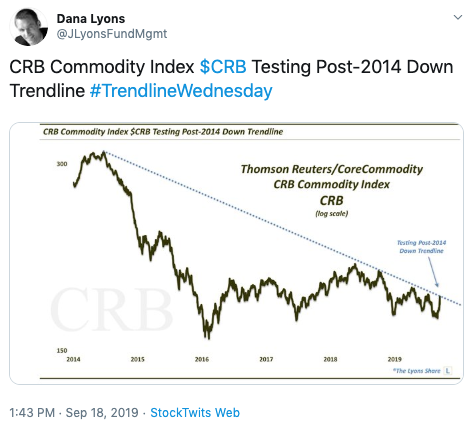 Today’s Chart of the Day was shared on Twitter by Dana Lyons (@JLyonsFundMgmt). It is a line chart of the Thomson Reuters CRB Commodity Index. The Index tracks 19 different commodities including; Crude Oil, Live Cattle, Copper, Soybeans, Lean Hogs, Gold, Corn, Wheat, Cotton and more. The index divides these commodities into four groups: 39% Energy, 34% Agriculture, 20% Metals and 7% Livestock. Dana notes that the index is currently testing its downtrend line from 2014. It’s down 43% in that time, however, the downtrend really goes back over a decade to the 2008 peak (not shown on the chart.) An interesting thing to think about when looking at this chart is how a breakout in commodity prices would impact inflation data.

Breaking Down the Russell Indices – The Chart Report
In this report, we take a look at some of the differences between the Russell 1000, 2000, and 3000.

Small Cap Rally: Why This Week Will Be Make-or-Break for the Russell 2000 – MarketWatch
This piece focuses on the Small-cap Russell 2000 and includes insights from Bank of America’s Technical Strategist, Steve Suttmeier.

There’s an old adage, “don’t fight the Fed.” Means that if the Fed is on a tightening course, don’t be long. And if the Fed is lowering rates, as now, don’t be short. Doesn’t always hold true, but often enough to ignore. The Fed has a lot of tools to achieve its objectives.

If the first two cuts in a new cycle are 25 basis points, stocks historically have done quite well.

While intraday time frames are not as important as daily, weekly, or monthly time frames, this is constructive price action for making an attempt at all-time-highs. Time and price will confirm.$SPX $SPY $ES_F pic.twitter.com/1FPNhinP3c

oh man this run in tech is going to get so damn aggressive. $XLK just now bouncing at 20/50 day SMAs and pivot 80.00. Soo much room to run for $GOOGL $TWTR $MSFT wow pic.twitter.com/PqnTPI8BQ8

US oil is 'closing the window' from Monday's gap, but it still has a long way to go – still 6.4% away from Friday's close pic.twitter.com/PvHL38mKjq

Nice bounce in Ethereum $ETHUSD , dont make rookie mistakes and chase ahead of an important VWAP from the recent peak pic.twitter.com/b17E06zPgI