Indices: US stocks were higher in today’s session with the Dow Jones Industrial Average gaining 74 points or 0.28%. The Russell 2000 was the strongest of the major indices for the second day in a row, rallying 1.23%. The S&P 500 and Nasdaq finished more or less flat, changing just 0.03% and 0.04%, respectively.

Currencies: The US Dollar Index was flat, changing just 0.04%. 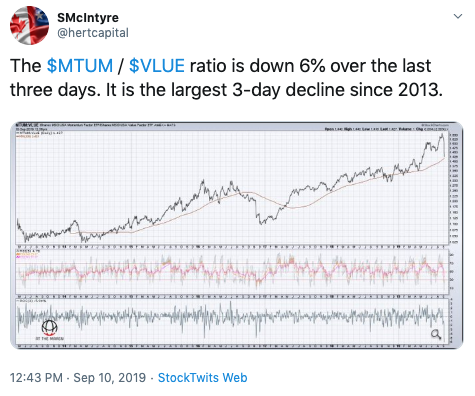 Today’s Chart of the Day was shared on Twitter by Sheldon McIntyre (@hertcapital). It’s a ratio chart showing the performance of the Momentum Factor ETF, $MTUM versus the Value Factor ETF, $VLUE. Over the past few days, there has been a sharp rotation out of Momentum stocks and into Value stocks. Sheldon points out that this has been the largest three-day percentage drop for Momentum relative to Value since 2013. It’s important to note that Momentum has significantly outperformed Value for years now. However, if this ratio fails to bounce soon, it could signal the beginning of a more significant rotation away from Momentum and into Value. We take a closer look at this development in our most recent report “Factor Battle.”

“The whole problem with the world is that fools and fanatics are always so certain of themselves, but wiser people so full of doubts.”
– Bertrand Russell (Mathematician & Philosopher )

Factor Battle – The Chart Report
In the past couple of days, there has been a swift rotation out of Momentum Stocks and into Value Stocks. In this report, we share some key insights into this development.

September Small-Cap Rally Underway – Almanac Trader
The Small-cap Russell 2000 has been particularly strong the past few days. Seasonality Expert, Jeff Hirsch explains that this is no surprise, as Small-caps tend to get a lift in early Septemeber.

S&P 500 Breakout Stocks – Bespoke
In this note, Bespoke brings to our attention several components of the S&P 500 that are breaking out of resistance.

Equities Show Promise – Peter Brandt
Peter Brand highlights some classic chart patterns that are developing on some of the most important equity indices from around the world.

It has been 31 trading days since the S&P made the last all-time high. Over that 31 trading day period, the S&P 500 has not touched 200-day intraday. If institutions believe the end is near, that will change in short order; has not yet. Day by Day. $SPX pic.twitter.com/JY877iEFzU

$IWM are small caps about to participate in an epic move to new Market All Time Highs? If they do, I'd feel much more at ease with $SPY $DJIA $QQQ break outs. pic.twitter.com/HlMU42OiKw

The Russell Value/Growth ratio is (already) on track for its biggest 1-week rally since 2009 – lots of stodgy value investors flying high this week (and fund managers who piled into momentum names feeling down!) pic.twitter.com/AwbpNWf0Gk

great perspective on the software selloff from @FrankCappelleri $IGV pic.twitter.com/Zopeyi4oLZ

There's a bit of an unwind in the momentum vs. value trade going on here. Over the past 2 days, the momentum etf has underperformed the value ETF by 5.8%, the largest 2-day underperformance of momentum since their inception in 2013. $MTUM $VLUE pic.twitter.com/wcmZ9hzZEL

I know that bull markets often correct through sector rotation. It is just the velocity of the rotation that is a bit puzzling. From momentum to value. $VLUE $MTUM pic.twitter.com/JBLYgKetGl

"There's something happening here
What it is ain't exactly clear…" pic.twitter.com/OSd17kBvG3

Value Line Geometric Index ($XVG) and % of $SPX stocks above 200-day average are reflecting the beneath the surface strength that has been widely commented on over past few days. $XVG above 540 would break pattern of lower highs and lower lows. pic.twitter.com/KWmCj91QX9

US #bonds are seeing their largest 5-day % drop since Nov 2016 pic.twitter.com/YRWCPDCDub

#Gold is down almost 4% in the last 5 trading days as bond #yields spike. pic.twitter.com/zGvxVCzmJt