Indices: US stocks were mixed in today’s session with the Dow Jones Industrial Average inching higher by 38 points or 0.14%. The Russell 2000 was particularly strong, gaining 1.27%.  On the other hand, the S&P 500 was flat, and the Nasdaq was slightly lower by 0.19%. 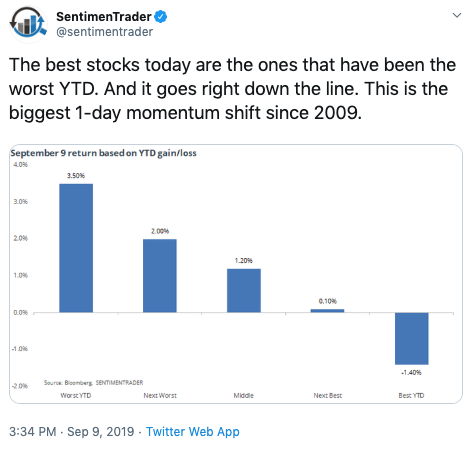 Today’s Chart of the Day was shared on Twitter by SentimenTrader (@sentimentrader). The chart highlights the fact that some of the worst-performing stocks year-to-date were some of the best-performing stocks today and vice versa. Price action felt somewhat backward as some of the weakest areas of the market caught a bid today. For example, Banks ($KBE), Retail ($XRT), Oil Services ($OIH) and Value Stocks ($SPYV) all did well today. On the other hand, stronger areas of the market like Growth Stocks ($SPYG) and Software ($IGV) were weak. It’s often said that sector rotation is the lifeblood of bull markets. It’s important to note that one day doesn’t make a trend, however, this is something worth paying attention to as it could be the start of a larger rotation.

“Nothing will work unless you do.”
– Maya Angelou (Poet )

Momentum Monday – Back Above the Range. Is the Rally a Trap? – Howard Lindzon
In this video, Howard Lindzon and Ivanhoff discuss the current market environment and identify some of the most attractive chart setups.

VIX on the Ropes to Start September – Schaeffer’s Investment Research
Todd Salamone of Schaeffer’s examines the unwind in negative sentiment and how it will impact the Volatility Index.

This is a Global Stock Market – All Star Charts
JC Parets of All Star Charts walks readers through the charts of over a dozen different global equity markets.

Bears Don’t Want to See These Charts – Yuriy Matso
Over the past few months, bears were pointing to the broadening formation on the S&P 500 to justify their position. In this piece, Yuriy Matso looks back on past scenarios where this chart pattern actually broke out to the upside.

Ppl who check the $SPX and see that it was down just 0.01% will be greatly surprised when they check energy stocks ($OIH), financial stocks ($KRE) and the recent tech momentum darlings. But the $SPX avoided an Outside Reversal Day by closing above 2972.51. pic.twitter.com/LNxR2ACd1O

$SPX price configuration reminiscent of late 2016. Seems too simple, but why fight the tape? pic.twitter.com/KV9svpqDoG

Supporting the idea of a global cyclical recovery – as the sacrificial offering.

Softwares have led the mkt for five yrs. $PSJ is the software ETF that most closely resembles leading software #stocks, w/ about 40% of it being aggressive growth vs 20% for $IGV, making it a useful barometer for this group

Don't look now… but… there is a SIZABLE shakeup taking place from a factor-perspective. If today feels weird to you, you're not alone. Momentum & Low Volatility stocks that have been leading this market are struggling today & Value just got a shot in the arm!💉 #interestrates pic.twitter.com/pIzicRkb4t

$GLD sucking back to the 50 sma and support… remember the metals always overdo moves pic.twitter.com/1J0NyZaIfl

The most interesting technical move in the FX market today by my count is the $EURCHF's bearish channel reversal: pic.twitter.com/bCl1cI6cFm

Not a good look for $PYPL if it closes like this.
Opportunity cost risk was apparent back in June (vs $SPY). pic.twitter.com/tG9He460tU

Will the S&P close at an all-time high before the end of September?