Indices: US stocks closed higher in today’s session with the Dow Jones Industrial Average jumping 373 points or 1.41%. The Russell 2000 and Nasdaq both advanced 1.75% and were the strongest of the major indices.

Currencies: The US Dollar Index was slightly lower by 0.06%. 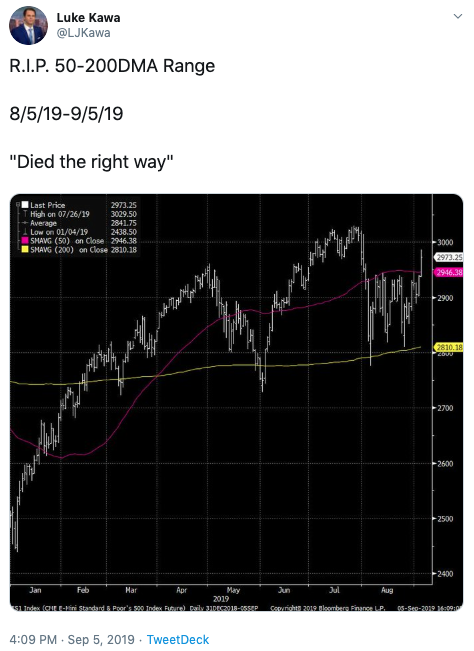 “Hint: money flows into most funds after good performance, and goes out when bad performance follows.”
– Jack Bogle (Founder of The Vanguard Group )

Currency Gets Pounded During Brexit Negotiations – The Chart Report
In this week’s Chart of the Week column, we take a look at the chart of the British Pound versus the US Dollar and the structural downtrend that it’s been in.

Two Must-See Charts About the Hang Seng and U.S. Stock Momentum – Bloomberg
Katie Stockton of Fairlead Strategies joined host Abigail Doolittle to discuss what she’s seeing on the charts of the Hang Seng Index and the S&P 500.

Historic Bond Rally About to Reverse Direction? – Kimble Charting Solutions
Chris Kimble breaks down a chart of the 20+ Year Treasury Bond ETF, $TLT. He explains that it’s extended here and running into resistance at the top of an 8-year rising channel.

Stocks (and Copper) Facing Seasonal Challenges – R.W. Baird
Here’s a research note from Willie Delwiche of Baird. He examines some of the seasonal headwinds facing Stocks and Copper in the near-term.

Market, Part IV: Today's upside break-outs on the DJIA, S&P 500 and the NASDAQ Composite imply that they will re-test their recent highs and could easily register new all-time highs.

Breakout from the recent range on good volume. $SPX pic.twitter.com/3Wl9TGU0Gf

So debt is cheaper, credit is OK, US macro data more steady than not, volatility bleeding lower. What's the bearish counter to all that? pic.twitter.com/HPD4pB5L2K

If I saw nothing else but this chart of relative strength of semiconductors $SMH, I would probably be somewhat bullish…$SPX $SPY pic.twitter.com/fMEcRFXjGJ

20+ Year Treasury ETF $TLT. A long way down if this is starting to mean revert. pic.twitter.com/3DLS9KcUM9

10-year Treasury yields are rising today the most since the beginning of January and took a leg higher after better than expected U.S. economic data out this morning. The 2-10s yield curve is now firmly positive & steepening. pic.twitter.com/mcT3mqA2vf

The 5 year US Treasury Note stopped right where you'd think it would pic.twitter.com/WXQCIkaJps

Of the 11 other times late buyers got slapped like this, they showed further losses a month later 8 times. pic.twitter.com/CiS9nroMpT