Indices: US stocks were higher in today’s session with the Dow Jones Industrial Average gaining 373 points or 1.44%. The Nasdaq outperformed the rest of the major indices, gaining 1.95%.

Currencies: The US Dollar Index gained 0.46%. 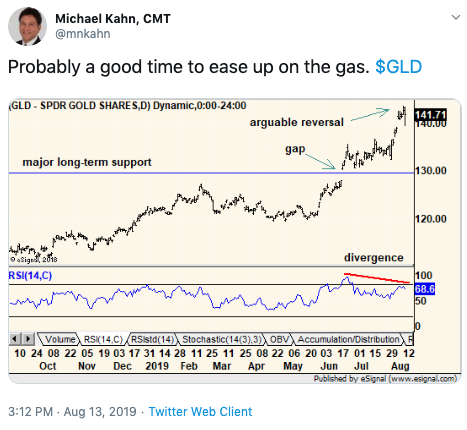 Today’s Chart of the Day was shared on Twitter by Michael Kahn (@mnkahn). It’s a daily bar chart of Gold over the past year. Gold has had a terrific run this year and is actually outperforming the S&P 500 year-to-date. Michael notes that it may be a good time to “ease up on the gas” because the chart is showing a bearish RSI divergence as well as a reversal pattern. A bearish RSI divergence occurs when price makes a new high while RSI fails to make a new high. In addition to the reasons Michael laid out, sentiment on Gold is beginning to reach extremely bullish levels, which is actually a bearish sign that the trade is crowded. We’ve been bullish on Gold and think that this is potentially the beginning of a bull market in Precious Metals. However, in the short-term, Gold looks like it needs some time to cool off and digest its recent gains.

“Markets are constantly in a state of uncertainty and flux and money is made by discounting the obvious and betting on the unexpected.”
– George Soros (Investor, Billionaire, Philanthropist)

Trendless Markets – The Chart Report
In this report, we address the flat 200-day moving average on the S&P 500 and the trendless environment that stocks have been stuck in for over a year now.

Stay Away From European Banks, Says Technical Analyst – CNBC
In this clip from CNBC, Ari Wald of Oppenheimer shares his thoughts on European Banks and tells investors to avoid buying them.

5 Signs the Stock Market is Terrified – Schaeffer’s Investment Research
Here’s an interesting note from Schaeffer’s, that examines five different sentiment indicators that are currently showing signs of “extreme fear” in the US stock market.

U.S Banks are Hitting Foul Balls: Technical Analyst – BNN Bloomberg
Todd Sohn of Strategas Research Partners discusses the current market environment. He touches on Banks, Bonds, and some of the individual sectors of the S&P 500.

Large caps continue to be the name of the game pic.twitter.com/R8Wk14wK1H

I think most of us would agree that $SPX option sellers have had a rough go since 2018. Just how rough you ask?

Let's compare a strategy that buys 7d ATM calls to one that sells 7d ATM puts (rolled with 1DTE). This is the growth of $1mm portfolio trading 5 contracts. pic.twitter.com/ktVjxNzQQW

Bulls would be happier if the fins started to generate some relative strength: pic.twitter.com/PDRcKKZRy2

I like to take what I consider the "Offensive Sectors" and compare them to my "Defensive Sectors". Both baskets equally-weighted: Financials, Tech & Discretionary vs Staples Utes & Healthcare $XLF $XLK $XLY $XLP $XLU $XLV – Will Ratio confirm $SPX or was that "THE" divergence? pic.twitter.com/I6wCLArZrU

No other point on the yield curve is close to new all-time lows.

So the US begins to join the rest of the world making new all-time-lows. pic.twitter.com/eSumU7yzJ0

$TEAM one of the strongest and most resilient charts out there pic.twitter.com/ivNCyzI4PE

$VFF has really turned into a marijuana leader pic.twitter.com/WrP6UqarxP