Indices: US stocks closed lower in today’s session with the Dow Jones Industrial Average falling 391 points or 1.49%. The S&P 500 and Nasdaq performed slightly better but still fell 1.23% and 1.20% respectively.

Currencies: The US Dollar Index inched lower by 0.11%. 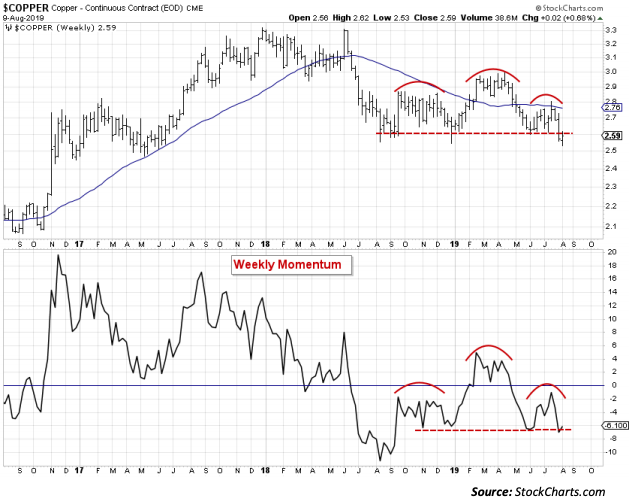 Today’s Chart of the Day was shared in a research note by Jeffery Huge of Alpha Insights (@Alpha_Insights). It’s a weekly bar chart of Copper Futures over the past three years. The chart highlights the bearish Head & Shoulders pattern that has formed. Confirmation of this pattern occurs when price breaks below the red horizontal line known as the “neckline.” As you can see, Copper has already broken below the neckline and looks to be headed lower. Copper is often used as a leading economic indicator because of its various industrial applications. This is one chart that traders and investors are watching closely right now because further weakness from this metal would be an early warning sign that global growth is slowing.

Silver Breakout “Test” Important for Precious Metals – Kimble Charting Solutions
Chris Kimble takes a look at the weekly chart of Silver. He points out that Silver is testing key resistance and explains that a breakout from this level would be bullish for the overall Precious Metals space.

Financials Dragging Down European Stocks – All Star Charts
In this video, JC Parets and Chart Report contributor, Steve Strazza discuss European Banks and how they’re weighing down some of the major European equity indexes right now.

This Biotech Kept its Head While Others Lost Theirs – StockCharts.com
Arthur Hill of StockCharts.com examines the chart of one Biotech stock that is showing strength relative to the broader market, Amgen ($AMGN).

$SPX – what if we are just stuck between the MAs which are stuck within the bigger consolidation that has been in place since Jan '18? Everyone love to talk "the market" but under the hood there is a lot of opportunity on both sides of the book.

Here is what has been working! pic.twitter.com/OLzQ2ky0xr

BAYCREST: “We are entering earnings season for many retail stocks. While the bar may be low, the trend is weak. A break under $38 for the $XRT ETF would suggest a massive six-year top is in place.”

It's fluid, and to me, has no signal. pic.twitter.com/wUj3Mfm9gb

Our world right now where yield curves have neither yields nor curves. pic.twitter.com/oBPL6BGqYo

if you're watching the ag market and aren't paying attn. to COT data, then you're missing a great piece of data that would have provided assistance to today's move in corn. Commercial corn traders were signaling price weakness. $CORN $ZC_F pic.twitter.com/OSkZUy4bEK

With #Gold passing $1,500, the total gold CoT open interest just hit 1.11 million contracts and is at an all-time high.https://t.co/Kum9lpTL5n pic.twitter.com/4RA9vMnzAE