Indices: US stocks were higher in today’s session with the Dow Jones Industrial Average gaining 244 points or 0.90%. The S&P 500 was the weakest of the major indices but still closed up 0.46%. 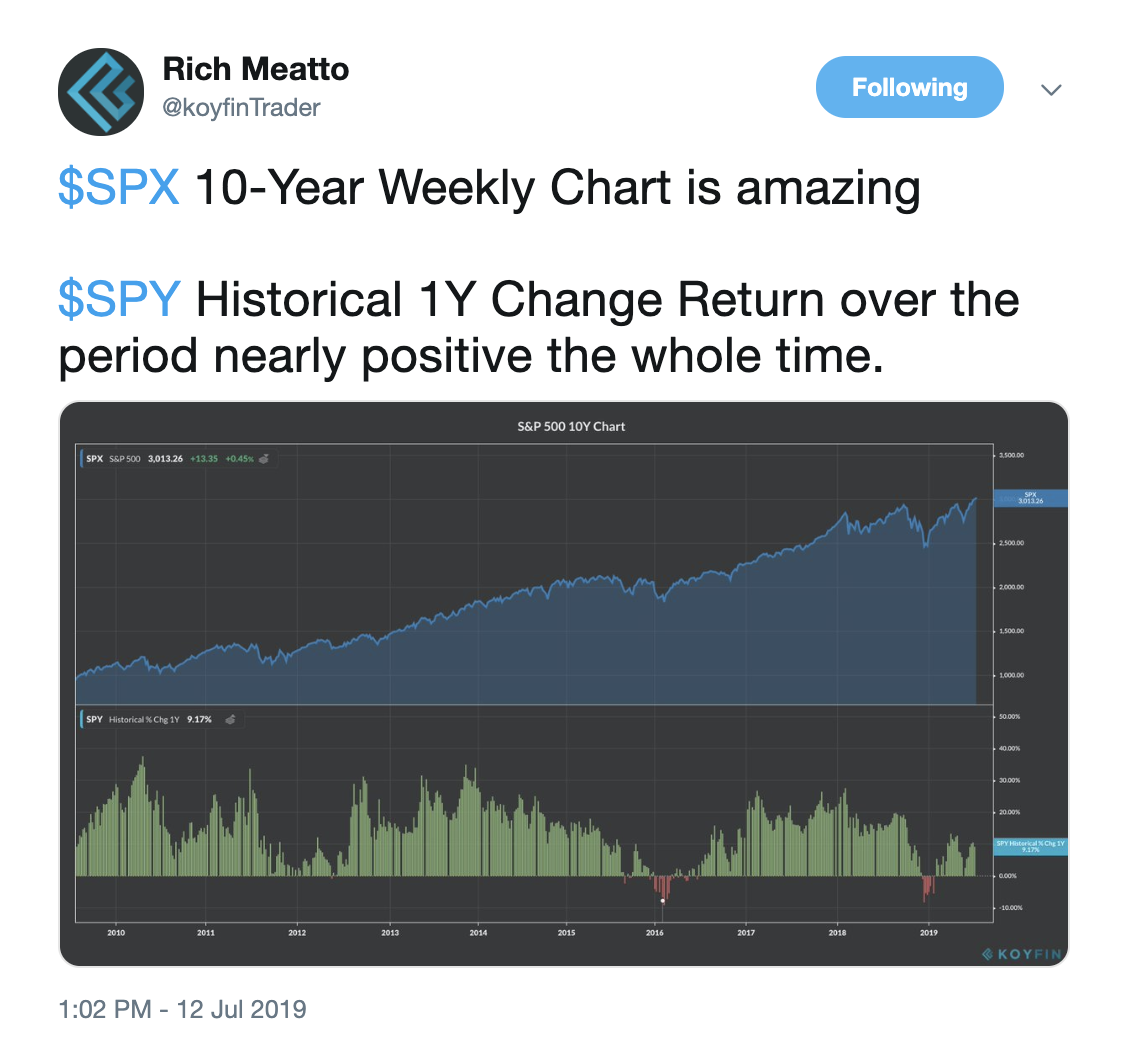 Today’s Chart of the Day was shared by Rich Meatto (@koyfinTrader). It’s an area chart of the S&P 500 over the past decade with a histogram of trailing 12-month returns in the bottom panel. Rich says the resilience of the S&P 500 has been “amazing” over the past decade as the trailing annual return has only been negative for a handful of weeks. This chart speaks to the strength of the secular bull market US Equities have experienced off of the financial crisis lows. The market is either in a state of all-time highs or a drawdown at any given period… and at least on a 12-month basis, drawdowns have been all but absent over the past 10 years.

“True knowledge exists in knowing you know nothing.”

Discussing the New High in Stocks, Volatility and the Lack of Small Cap Strength – Andrew Thrasher
Portfolio Manager and Volatility Expert, Andrew Thrasher was on TD Ameritrade to share his thoughts on the current market environment.

Breakouts to 52-Week Highs – Bespoke
Here’s a note from Bespoke that highlights some of the stocks that are currently printing new 52-week highs.

A Stock Market Trip Around the World – All Star Charts
A lot of us have a home country bias and only focus on US stocks. In this video, JC Parets and Phil Pearlman run through a number of different global equity markets to find the best risk/reward opportunities around the world.

Gold is Doing Better than the World’s Major Currencies – Stock Charts
In this article, legendary Technician, John Murphy offers up some insights on the rally in Gold prices that’s been taking place over the past few months.

Sometimes you just have to keep it simple. That's a breakout for the Dow and the futures are pointing higher this morning. $DJI pic.twitter.com/OMwkjIf5U6

The Dow is has gapped higher three consecutive days and twice to records. Feels like a low-budget remake of 2H 2017 pic.twitter.com/kJZLhuxYct

$SPY 65min – wedging, but that doesn't mean price has to resolve lower pic.twitter.com/DpZCfEG7Xg

Fundamental story looks great (as well as all the fantastic people & food there)… but flows are getting quite hot.

Maybe this could use a pullback or consolidation to rebuild the wall of worry?