Indices: US stocks were lower in today’s session with the Dow Jones Industrial Average falling 116 points or 0.43%. The Russell 2000 was the weakest of the major indices, falling 0.90%.

Currencies: The US Dollar Index gained 0.08%. 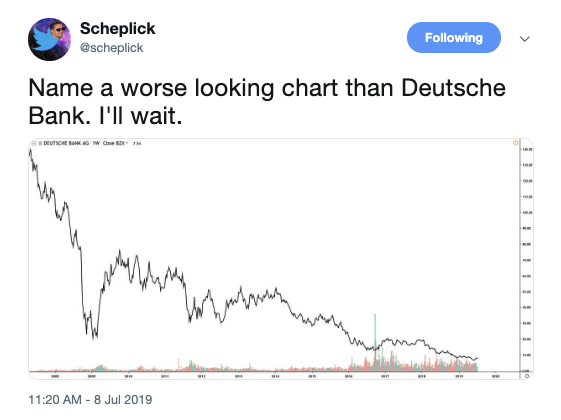 Today’s chart of the day was shared on Twitter by Stefan Cheplick (@scheplick). It’s a line chart showing the dismal performance of Deutsche Bank’s stock ($DB) since 2007. In that time, shares of Germany’s largest bank went from over $130, to where they sit now at around $7.50. The tweet ushered in a comical response of other terrible looking charts of stocks that have fallen precipitously such as $GPRO and $XIV. One of the first things you’re taught in trading/investing is “buy low and sell high.” While this is true, it causes people to hunt for beaten down names in hopes that they’ll return to prior levels. These names are often in clear downtrends like $DB and folks are left scratching their head when price continues lower in the direction of the trend. This chart echoes common market aphorisms like; “Don’t fight the trend” or “Never catch a falling knife.” Charts like this one serve as a good example of the dangers of bottom fishing. Check out the full thread for a few lessons and laughs.

“You can’t be afraid to fail. It’s the only way you succeed – you’re not gonna succeed all the time, and I know that.”

US Aerospace at All-Time High for 4th of July – The Chart Report
In this week’s Chart of the Week column, we take a look at the Aerospace & Defense industry group. We include a ratio chart that illustrates how the group has outperformed the broader market.

Takeaways from 119  Years of Volatility History – Thrasher Analytics
Here’s a piece from volatility expert, Andrew Thrasher. He summarizes the key takeaways from a recent study that looked at 119 years of stock market data to conclude that volatility isn’t exactly caused by economic fundamentals.

Bet on this Dow Laggard as a Second-half Play: Technical Analyst – CNBC
In this clip from CNBC, Mark Newton offers up two Dow components that he thinks will do well in the second half of the year, UnitedHealth ($UNH) and Goldman Sachs ($GS).

Sentiment Slowly Recovering – Bespoke
In this note, Bespoke analyzes the latest AAII sentiment survey. They point out that bullish sentiment has improved over the past few weeks, but it’s still relatively low considering that the S&P 500 is at all-time highs.

The S&P 500 Index remains close to its all-time reached last Friday, but the S&P 600 small cap index is still 13% of its high. pic.twitter.com/wZ5ub1lndZ

Financials are firming with more issues above their respective 200-day average than at any point over the last 16 months. pic.twitter.com/ToaXVWSrG6

#GOLD COT – As of July 2, Commercials had their biggest short position since the summer 2016. pic.twitter.com/ox33kw0Qxp

Although I know next to nothing about interest rates, this looks like a pretty impressive reversal bar on the weekly chart. pic.twitter.com/BNci2cyNKw

$NKE continues to follow through today. Right up to the top edge of that 4-month consolidation. pic.twitter.com/RF8T7GeH1H