Currencies: The US Dollar Index slipped -0.17%. 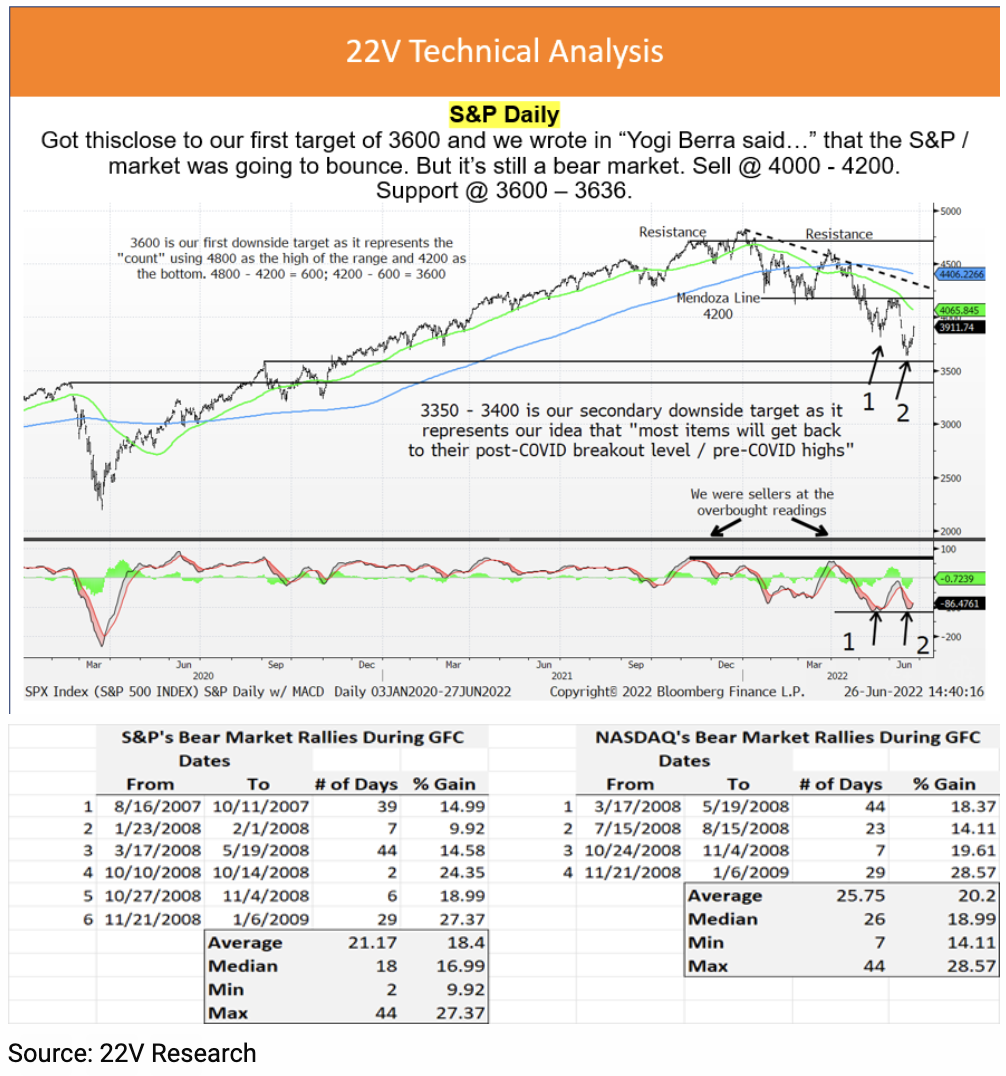 Today’s Chart of the Day was shared in a note by John Roque of 22V Research (@daChartLife). The S&P 500 has rebounded about 6% over the past six trading days, however, John points out that this should be treated as a bear market rally until proven otherwise. The index is still in a confirmed downtrend, and overhead resistance is lurking around 4000 – 4200. This area acted as support in March, but it became resistance when it failed in early May. The tables below serve as a reminder that double-digit rallies are commonplace in bear markets. These bounces can be seductive, lasting for several weeks before eventually rolling over. At this point, the S&P 500 would have to gain about 23% to return to where it started the year at all-time highs. It’s unlikely to make a stand like that without hitting its head on resistance first.

“Successful investing is having everyone agree with you… later.”

A Logical Place to Bounce – Means to a Trend
Austin Harrison points out that the weakest sectors have led the recent rebound.

Oppenheimer’s Ari Wald Charts Out Where You Want to Be in the Energy Space – CNBC
Ari Wald shares his thoughts on the Energy sector after its recent correction.

Healthcare as a Leadership Group – All Star Charts
JC Parets points out that the Healthcare sector is showing relative strength.

The Wonkavator – The Weekly Trend
In this podcast, David Zarling and Ian McMillan discuss some of the most noteworthy technical developments to keep an eye on.

Today was the first day since late April in which the S&P 500 traded within a 1% range during the day.

Short squeeze: since Russell 3000’s most recent trough on 6/16/2022, best-performing members have been those with highest short interest ratio pic.twitter.com/fzRckThFhm

Other than this year, only other time in the past quarter century that both stocks and bonds were down in back-to-back quarters was in 2008.

With echoes of financial crisis seen in price, breadth and liquidity, burden of proof is on the bulls: https://t.co/ECEtJYXgcQ pic.twitter.com/i29Z1goEsw

No indicator is perfect, or uniquely prescient, but here’s one that’s likely to confirm the next durable advance. pic.twitter.com/HIt7ZV4XGR

With China coming out of lockdowns will this breakdown in copper prove to be false? Or is copper headed back to the 3.30/3.50 area? #copper #China pic.twitter.com/6AHDrlB1lI

Interestingly enough, #Copper bear markets have accompanied some of the largest up moves in equities including the 2014 secular breakout and the entire 'irrational exuberance' move from 95-99. pic.twitter.com/Gb41Db5vPJ

Cotton futures are now down >35% since the CRB index peaked on June 10th. $CT_F #commodities pic.twitter.com/1THAUOk3xW

Laugh all you want, but cotton's recent crash should have bond traders on high alert.

In every single divergence over the past 6 years, cotton has ended up being "right" pic.twitter.com/dQzCGUNnRF