Indices: US stocks were mixed today with the Dow Jones Industrial Average gaining just 8 points or 0.03%. The rest of the major indices finished negative, with the Russell 2000 falling the hardest, down 1.26%. 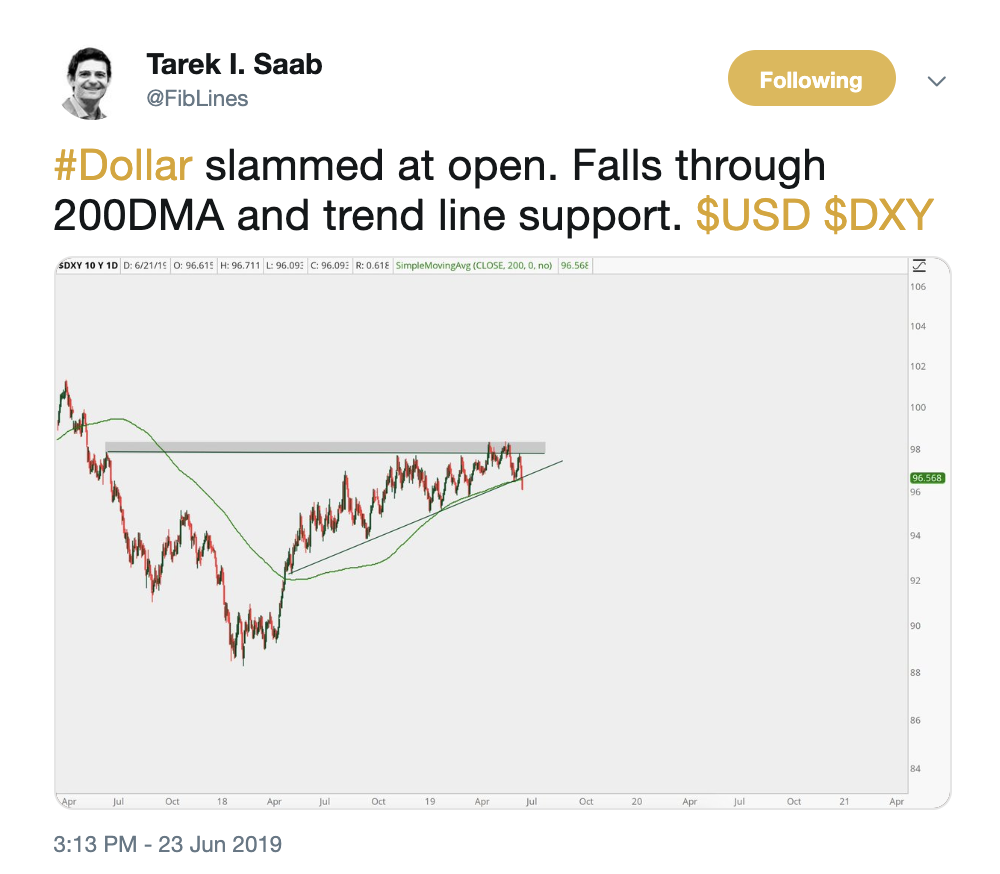 Today’s chart of the day was shared on Twitter by Tarek Saab of Fibonacci.com (@FibLines). It’s a daily candlestick chart of the US Dollar Index ($DXY). Tarek points out that the Dollar has violated both its 200-day moving average and its upward trendline. Both the 200-day-moving average and the upward trendline have acted as support several times in the past. The fact that price has pierced through both is a clear indication that the Dollar is rolling over. It’ll be important to keep an eye on this chart as the Dollar will impact several other asset classes.

“Success is liking yourself, liking what you do, and liking how you do it.”

When Buying Record Lows Makes Sense – The Chart Report
In this week’s Chart of the Week column, we take a look at the Small-cap Energy Sector ETF, $PSCE. Small-cap Energy stocks have underperformed over the past five years, but we think they’re beginning to look like an interesting mean reversion setup.

Will it Hold? – The Reformed Broker
The S&P 500 made a new all-time high last week. In this quick read, Josh Brown shares a chart from Jonathan Krinsky, a technical analyst at Baycrest Partners. He points out that the issue hasn’t been reaching new highs, but rather holding above new highs.

Big S&P 500 Junes Drain Life from July – Almanac Trader
The S&P 500 is having its best June since 1955. Seasonality expert, Jeff Hirsch explains that, historically, strong gains in June have been followed by muted gains in July.

Forex Place – Peter Brandt
Volatility in Forex markets has picked up recently. In this piece, legendary trader and chartist, Peter Brandt shares his thoughts on two currencies that are breaking out versus the US Dollar.

Bitcoin Soars as Investors Pile In – Bespoke
Bitcoin is having a great year. It’s up over 193% in 2019 and has recently broken out above the key $10,000 level. In this note, Bespoke discusses a popular Bitcoin ETF, $GBTC and how it’s suggesting that retail investors are getting back into Bitcoin.

Despite its stationing at record highs, the $SPX's daily range is the smallest currently since Dec 28th, 2017 (holiday conditions). It isn't his quiet because things are calm in the economy and financial system… pic.twitter.com/kXBW8Pmtxc

One of the charts from last nights Thrasher Analytics letter… $VIX has risen nearly 20% over last two months as $SPX makes a new high. Was more common in the mid-90s & in '14/'15 while '07 gets most of the attention. Also occurred in Jan. '18 as well. pic.twitter.com/g26asJDxc5

“The Dollar is now in a Dow Theory downtrend of lower highs and lower lows.” My latest thoughts on $DXY $USD $UUP on @StockCharts https://t.co/u9srnWh7zw pic.twitter.com/fXtQFZLrsY

#Bitcoin and #Gold continue to rally in tandem as investors looking for alt-currencies in time of negative interest rates and CenBank liquidity glut. pic.twitter.com/WweWK6sbBH

"Federal Reserve that doesn’t know what it is doing" pic.twitter.com/lEt6YEaBA4