Indices: US stocks were relatively unchanged in today’s session with the Dow Jones Industrial Average changing just 14 points or 0.05%. The S&P 500 and Nasdaq moved 0.04% and 0.01%, respectively. 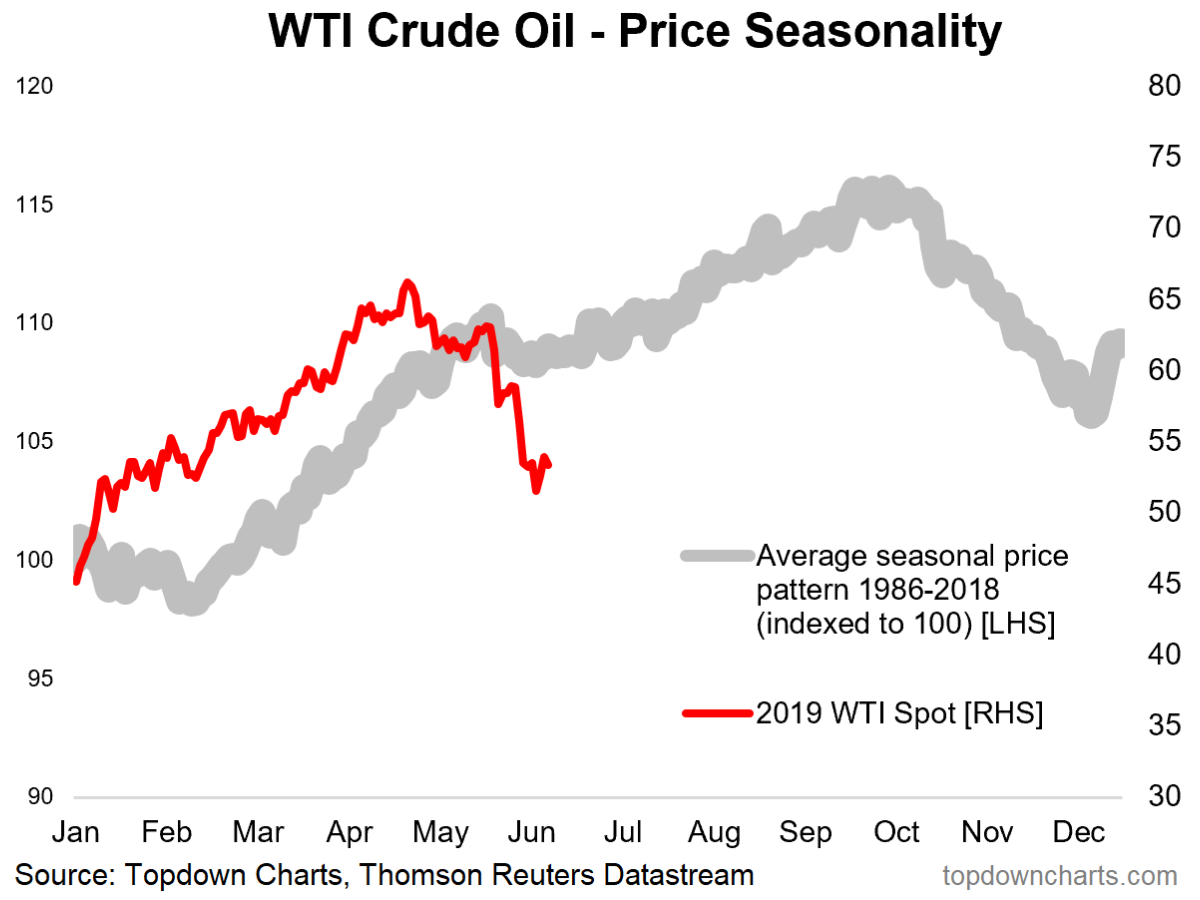 Today’s chart of the day was shared in a note from Callum Thomas (@Callum_Thomas). It’s a seasonality chart of WTI Crude Oil showing how price typically moves in a year. Overlayed in red is how Crude oil has performed thus far in 2019. In the note, Callum explains: “the slump in oil prices came just after the end of that positive seasonal patch.” He adds that Crude Oil prices tend to pick up towards the end of June. In a recent report, we highlighted the strong correlation that currently exists between Crude Oil and the S&P 500. If prices follow their seasonal trend, and Oil prices begin to rally, it would likely be a positive for stocks.

Top Links
S&P 500: More Room to Run? – Real Vision
Joe Perry, CMT of ForexAnalytix made an appearance on Real Vision today to give an update on the S&P 500. He laid out how to trade the current bounce and which levels to keep an eye on.

Being Wrong When You Get it Right – Of Dollars and Data
Here’s a great read from Nick Maggiulli of Ritholtz Wealth Management. He discusses the tendency for market participants to fixate on being right, rather than making money or outperforming the market.

Technicals Suggest Investors Shouldn’t be too Bearish, Expert Says – CNBC
In this clip from CNBC, Chris Verrone of Strategas gives his outlook on the US stock market. He points out that breadth is expanding, and thinks the S&P 500 is poised for new highs at some point in the second half of the year.

June’s Boon – 5% DJIA Gain Already – Almanac Trader
June is off to a great start with the Dow Jones up 5% so far. In this quick read, Jeff Hirsch points out that a strong start to the month of June is typical, but adds that the second half of June tends to be weak.

Sector-Level Trends Support S&P 500 Bounce – R.W. Baird & Co.
In this research note, Willie Delwiche outlines the sector-level trends that he’s watching. He breaks down the relative strength, momentum, and breadth across each of the 11 S&P 500 sectors.

Here's every other similar event in the past 25 years and how $SPX did afterwards. pic.twitter.com/Snla42foKJ

$QQQ $COMPQ Volume heavily focused near the LOD during the second half of the day today. #raindrops pic.twitter.com/gqChrd6D4G

The rally in high-yield bonds has, by some measures, been more significant than the one in U.S. equities. Investors are now demanding the smallest extra premium to own U.S. junk-bonds over the S&P 500, based on its earnings yield, since November 2017. pic.twitter.com/DaMCaybMRR

Here is the monthly chart of the 10-year to 3-month Treasury yield spread overlaid with the $SPX in blue (red boxes are periods of recession) – with Chart – pic.twitter.com/LklOchqFwD

September #corn is popping again. Looks like that pivot point at last years high is doing its job. pic.twitter.com/y56DnZXtkN

In the long run, $SPX has outperformed $GOLD. Those with investment horizons measured in decades rather than centuries, however, should acknowledge massive swings in the relationship. #BarometerOfConfidence pic.twitter.com/Oc5cuSyLYb

#Palladium Third test of resistance (prior support). If it can break through here and reclaim that line as support, it would be very bullish signal. $PA pic.twitter.com/DhkhFGsTIS

Working on a blog post for you guys: “How to explain to your Beyond Meat margin call to your wife.” pic.twitter.com/EUi24pm5G2