Indices: US Stocks closed higher in today’s session with the Dow Jones Industrial Average gaining 470 points or 2.24%. The S&P 500 and Nasdaq finished up 2.28% and 1.72%, respectively. The Russell 2000 underperformed the other major indices but still gained 1.29%.

Currencies: The US Dollar Index gained 0.63%. 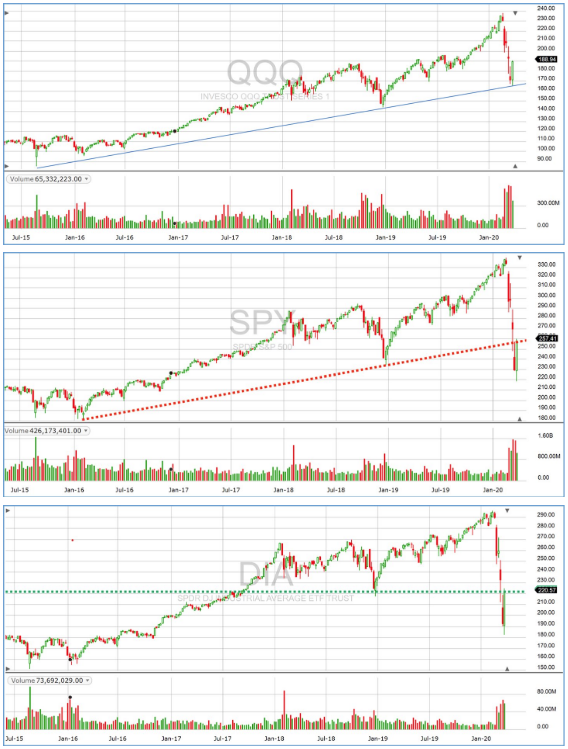 “The stock market is the best place to spot emerging trends”

Sector Relative Strength – Bespoke
Bespoke takes a look at how each of the 11 sectors have performed, relative to the S&P 500.

Why the Market Doesn’t Need to Plummet Further Amid Coronavirus – Yahoo Finance
In this article, Joe Fahmy explains why he remains optimistic on US Stocks despite the coronavirus pandemic.

Keeping Your Winners – MurphyCharts
Shane Murphy discusses some of the challenges of trading in this market environment and points to a few technical developments worth keeping an eye on.

Chart Summit 2020 Review With JC and Strazza – Technical Analysis Radio
In this podcast, JC Parets and Steve Strazza highlight some of the key themes from this past weekend’s 4th annual Chart Summit event.

1- no one knows what is next for the market
2- trend is lower and until that reverses odds favor more downside
3- know your timeframe
4- don't be stupid with your money
5- when in doubt, cash is a position

1) Stocks are breaking down relative to bonds
2) Stocks have been in a relative uptrend vs. commodities since 2013
3) Commodities are in a downward trend relative to bonds, indicating deflationary pressure$SPX $VT $BND $TLT $CRB $USB pic.twitter.com/9ogLwKzSvC

If you told me that $SPX would be -25% off its highs in just over a month and the chart of $SOX:$SPX would look like this i’d have laughed in your face for 12 minutes straight. pic.twitter.com/Zdj2U48mhh

This index goes long high-beta high momentum and short high-beta low momentum. By far the widest spread in at least a decade. pic.twitter.com/31QBfzcNb6

Emerging Markets just suffered the most aggressive selling purge on record (like almost everything else).

Flows are starting to turn up again.

This level needs to hold for the bulls. Basic TA tells us the more times a level is tested, the higher the likelihood it breaks, and you do NOT want to own equities if this ratio breaks down. Similar charts of equities relative to $GLD and $TLT have already broken down. $SPY $JXY pic.twitter.com/EqgtIDTSYQ

Crude Oil was up 24.7% today, its largest daily gain in history. $WTIC pic.twitter.com/nhy8VQTfof

So here's the chart of Crude I'm watching.

If we're above 20.50, I think the near-term bias is to the upside and longs can see how this mean reversion develops. pic.twitter.com/T99jq5B72s