Currencies: The US Dollar Index gained 0.54%.

Interest Rates: The US 10-year Treasury yield moved higher to 1.867%

A key way to define a bull market is the creation of higher highs and higher lows. A bull market looks like the silhouette of a staircase.

Since the COVID lows, we've unquestionably been in a bull market & have yet to make a lower low.

This trend is currently being threatened. pic.twitter.com/SS7AZJ6W04

Today’s Chart of the Day was shared by Caleb Franzen (@CalebFranzen). It’s a daily candlestick chart of the S&P 500 over the past two years. Do you know where the terms bull & bear markets come from? They refer to the way in which the two animals fight. Bulls fight with their horns plowing upwards, while bears fight with their claws slashing downwards. The media defines a bear market as a 20% decline, however, as technicians, we care more about the trend. Is it in an uptrend or a downtrend? An uptrend is defined as a series of higher highs & higher lows, while a downtrend is a series of lower highs & lower lows. We’ve been in a clear uptrend for nearly two years now making a series of higher highs and higher lows. However, Caleb points out that the uptrend is currently in jeopardy as we test the October lows around 4300. We haven’t cracked that level just yet, but a close below there would confirm that we’re no longer in an uptrend.

“I’m a trend follower, not a trend fighter. I’m smart enough to realize that a slap is easier to recover from than a beating.”

Are Energy Stocks Suggesting Long-Term Strength? – Kimble Charting Solutions
Chris Kimble explains why the Energy sector could continue outperforming the S&P 500 over the next few months.

Stock Market Analysis January 26, 2022 – AlphaTrends
In this quick video, Brian Shanon analyzes this week’s wild price action and highlights some key levels to watch in the remainder of the week.

Brazil and Russia Go in Opposite Directions – Bespoke
Bespoke examines the trends in international markets. 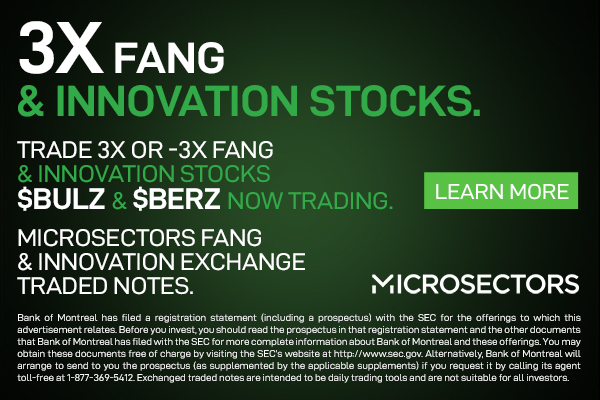 A classic bear pennant in the works, ominously right below 200-day MA.

A decisive break lower generates measured move target of round, psychological 4000 level, which would represent 17% sell-off from peak.

$QQQ – Does it have to be more complicated than below $350 stay away? pic.twitter.com/sP9rdtV9hP

The $VIX close above its upper Bollinger Band for the 7th consecutive session; first time since September 2001. pic.twitter.com/ct1Jdn9Fqm

Most important chart on my screens – 10-year yield. Former resistance turning into support at ~1.75?

CHART OF THE DAY: The Bloomberg Commodity Spot index, a basket of 23 raw materials from oil to wheat and aluminium, has surged to a fresh all-time high, surpassing the peak set in October. Commodity inflation isn’t transitory pic.twitter.com/aVddp429SB

Copper futures have been consolidating since May '21 after the strong run from the 2020 low. A chart I'm watching . pic.twitter.com/UmkPcThoyN

Is the US Dollar $DXY getting ready to break out or will it remain range bound?
Probably a chart to keep an eye on. pic.twitter.com/4eKZYBwC74

Can they get it back above 41,000? It's not the bet I'm making, but I can't think of a more bullish catalyst for #bitcoin You think they can do it? Or do we see 30 first? pic.twitter.com/4YGUOwpRYy