Currencies: The US Dollar Index fell 0.13% to a fresh two-month low.

Energy / S&P 500 ratio nearing an important inflection point once again. Does it fail again or is the third time the charm?
$XLE $SPY pic.twitter.com/krK8QXTelM

Today’s Chart of the Day was shared by Matthew Timpane (@mtimpane). It’s a ratio chart of the Energy Sector vs. the S&P 500 over the past six years ($XLE/$SPX). Energy has been the worst-performing sector over the past 3, 5, and 10 years. However, the long-term trend of underperformance has been in the process of reversing over the past year or so. It was the best performing sector in 2021, gaining more than 50%, and it has continued to outperform by a wide margin in the new year. It’s already up more than 13% in the first two weeks of 2022, while the S&P is down about 2%. Matthew points out that the ratio is currently testing an important resistance level after forming a bottoming pattern known as an inverse head & shoulders. If it does break out here, it would be further confirmation that a long-term trade change is truly underway.

“When a trader starts to feel really smart, he or she is headed for a huge drawdown.”

The Buck Loses Its Trend, While Commodities Gain Theirs – SentimenTrader
Jason Goepfert examines the recent weakness in the Dollar, and the strength in Commodities. 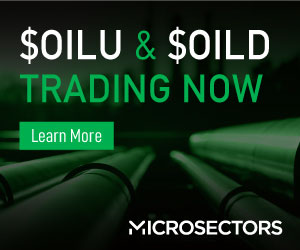 $SPX – daily closed back in the penalty box below $4700. pic.twitter.com/9fisEHN5AM

Just because something like crude oil has already had a significant run doesn't mean there is limited upside! "Never confuse the top of the page with resistance."$WTIC pic.twitter.com/KfS0RHnIS4

Metals & Mining on the run pic.twitter.com/kvUal6KhUs

Is it time for copper? pic.twitter.com/JtnRFI07Nq

Interest rates are trending down today, yet Pure Value (+0.9%) is beating Pure Growth (-0.7%). Partly because real rates aren't moving down, inflation expectations are. Either way, a departure from the usual pattern. pic.twitter.com/UeFgt2wSjr

Real yields on 10-year bonds are the least negative now since April 2021. pic.twitter.com/amNkbQJNgH

$KWEB I've seen a lot of bottom callers lately in China tech. I'm not so sure. Still some work to do imo… $BABA $TCEHY pic.twitter.com/qjTrEkVQ4c

Love how value made a 20 year relative low after everyone started searching for gamma squeezes. pic.twitter.com/AgU9tNONi4